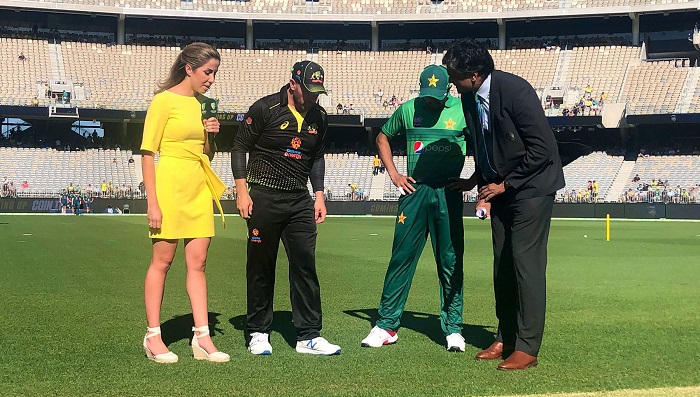 Australia won the toss and chose to bowl in the third and final Twenty20 against Pakistan in Perth on Friday as they look to wrap up the series.

The home team won the last game in Canberra by seven wickets, thanks to a brilliant 80 not out from master batsman Steve Smith.

It put then 1-0 up after the opening clash in Sydney was abandoned due to rain, leaving them unbeaten in their last seven matches over the short format.

Australia have made two changes with fast bowler Pat Cummins rested after a long run of games and Billy Stanlake taking his place. Another quick, Sean Abbott, got the nod ahead of spinner Adam Zampa.

"It feels like there's a little bit of moisture in the wicket and hopefully we can get the ball to move around," said captain Aaron Finch in explaining why he opted to bowl.

Skipper Babar Azam has been the standout batsman for Pakistan, hitting two consecutive 50s. The aggressive Iftikhar Ahmed offered some support in Canberra, but the rest of the top order have failed to deliver.

They have made four changes with Imam ul-Haq, Khushdil Shah, Mohammad Hasnain and Muhammad Musa all coming into the side.

"If we had won the toss, we would have bowled first as well," Azam.