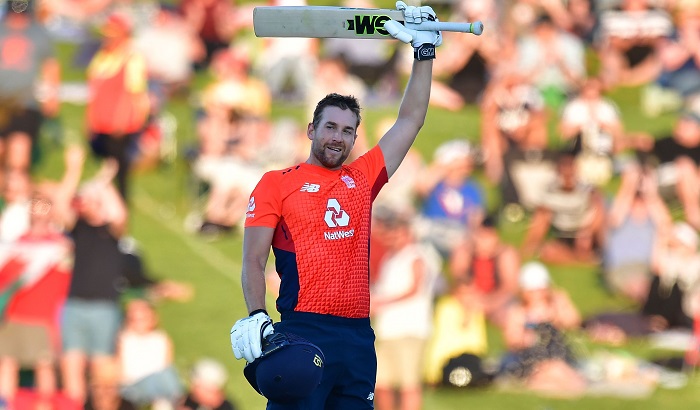 England's Dawid Malan celebrates 100 runs during the Twenty20 cricket match between New Zealand and England at McLean Park in Napier on November 8, 2019. –AFP

Eoin Morgan and Dawid Malan pummelled the New Zealand attack in a record-breaking 182-run stand as England posted an imposing 241 for three batting first in the fourth Twenty20 international in Napier on Friday.

Malan was 103 not out at the close with Morgan falling in the final over for 91 as he tried to plunder the boundary to join his partner on three figures.

The pair posted the highest third-wicket partnership by any side in a T20 international and the 241 is England's highest total.

Malan faced only 48 deliveries for his century, easily eclipsing the previous record of 60 balls by Alex Hale.

Malan, in full flight, took 28 off one Ish Sodhi over with three sixes, two fours and a two and reached his maiden century pulling Trent Boult over the square-leg boundary.

It was a vital innings for England who trail 2-1 in the series and need a win in Napier to take the series into a decider in Auckland on Sunday.

After losing the toss, England then lost early wickets with Mitchell Santner removing Jonny Bairstow for eight and Tom Banton for 31 to have the tourists 58 for two in the eighth over.

Santner had the impressive figures of two for five from his first two overs but that was to change dramatically as Malan and Morgan took charge.

They took 20 off the left-arm spinners third over and Santner finished his four-over spell with two for 32, which were the best New Zealand figures.