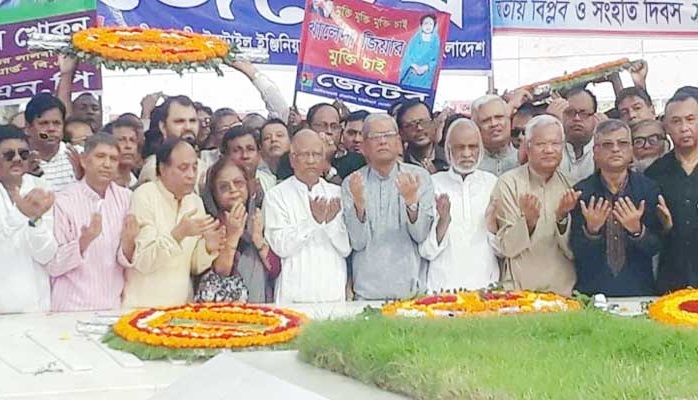 He was saying this while talking to reporters after paying homage to BNP founder late Ziaur Rahman by placing floral wreaths at his grave at Sher-e-Bangla Nagar in the capital on Thursday morning.

Fakhrul, along with his party men, placed floral wreaths at the grave of Ziaur Rahman in the area marking the “National Revolution and Solidarity Day” on November 7.

The BNP leader said, “The government didn’t allow a freedom fighter like Sadeque Hossain Khoka alive in the country.”

“We don’t want recurrence of such incident in the future,” he added.

The BNP secretary general also urged his party men as well as people of the country to hold “the spirit of November 7” for forging a united movement to release their imprisoned party chairperson Khaleda Zia.

Meanwhile, the body of former mayor of undivided Dhaka City Corporation Sadeque Hossain Khoka was brought back to the country this morning.

The second namaz-e-janaza of the freedom fighter was held at South Plaza of Jatiya Sangsad at 11:15am.

Later, his body was kept at the Central Shaheed Minar so that people could pay their tribute to the freedom fighter.