No move yet on bus drivers wage 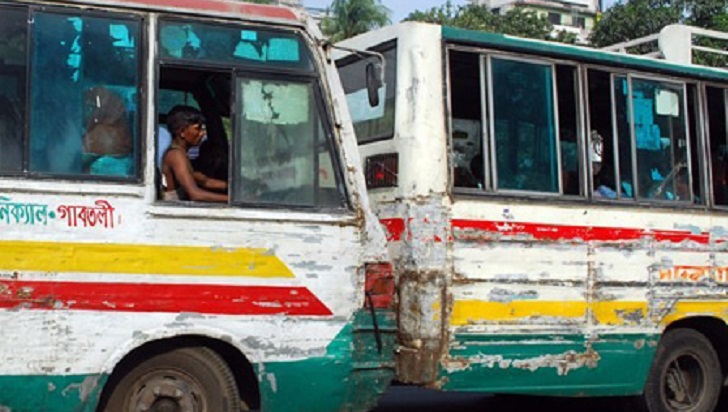 The decision of introducing salary-based wages for the bus drivers in the capital is yet to be implemented, prompting them to drive recklessly for meeting their daily payment target.

On August 8, 2018, Bangladesh Road Transport Owners’ Association (BRTOA) took the decision to curb the reckless driving in the city.

The association wanted to introduce a monthly payroll system for the bus drivers and other staffers so that they do not go desperate for meeting the target set by the owners of the vehicles.

After taking the decision last year, BRTOA Secretary General Enayetullah said they would implement the decision in September 2018.

He then explained: “The drivers drive their buses recklessly in a bid to earn extra money from additional trips. If they get a monthly salary, their mentality of rash driving will change.”

Some bus staffers in the capital have said they are eagerly waiting for implementation of the decision. In the contractual system, bus staffers have to pay all expenditures from bus rent to extortion.

A single trip has six ‘checks’ and four ‘monthlies,’ collection of tolls, from Sadarghat to Abdullahpur, a helper told daily sun on Sunday.

The helper said they paid Tk400 to a sergeant on that day while Tk1,200 more would have to be paid to the association, traffic inspector and other persons.

Apart from the rent money, a bus driver needs about Tk26,000 every months to ply the roads in the capital.

Traffic police often file cases against the bus for unfitness. The staffers, particularly driver, have to pay half of the fine money while the rest is given by the owner, a driver said.

When asked to comment, Enayetullah said that it would take some more times to implement their decision.

“With the help of city corporations, we are trying to set up ticket counters in the city,” he said. In response to a question regarding extortion, he said that the association takes a little amount of money and the owners deposit some money in GP fund. “I cannot comment on the money taken by others,” he said.