Fall of Berlin Wall: How 1989 reshaped the modern world 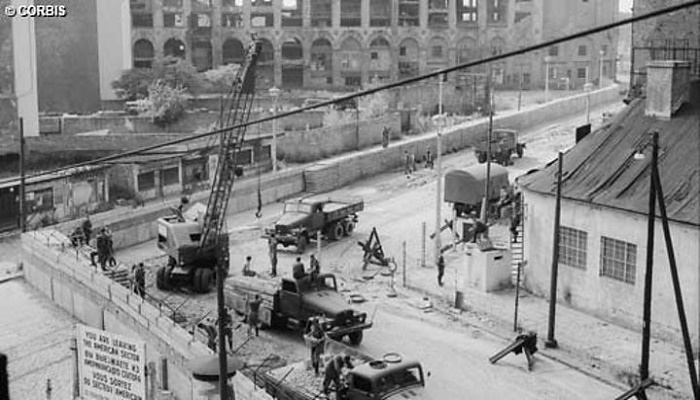 World events often move fast, but it is hard to match the pace and power of change in 1989.

It culminated in one of the most famous scenes in recent history - the fall of the Berlin Wall.

The wall came down partly because of a bureaucratic accident but it fell amid a wave of revolutions that left the Soviet-led communist bloc teetering on the brink of collapse and helped define a new world order, reports BBC.

How did the Wall come down?

It was on 9 November 1989, five days after half a million people gathered in East Berlin in a mass protest, that the Berlin Wall dividing communist East Germany from West Germany crumbled.

East German leaders had tried to calm mounting protests by loosening the borders, making travel easier for East Germans. They had not intended to open the border up completely.

The changes were meant to be fairly minor - but the way they were delivered had major consequences.

Notes about the new rules were handed to a spokesman, Günter Schabowski - who had no time to read them before his regular press conference. When he read the note aloud for the first time, reporters were stunned.

"Private travel outside the country can now be applied for without prerequisites," he said. Surprised journalists clamoured for more details.

Shuffling through his notes, Mr Schabowski said that as far as he was aware, it was effective immediately.

In fact it had been planned to start the next day, with details on applying for a visa.

But the news was all over television - and East Germans flocked to the border in huge numbers.

Harald Jäger, a border guard in charge that evening, told Der Spiegel in 2009 that he had watched the press conference in confusion - and then watched the crowd arrive.

Mr Jäger frantically called his superiors, but they gave no orders either to open the gate - or to open fire to stop the crowd. With only a handful of guards facing hundreds of angry citizens, force would have been of little use.

"People could have been injured or killed even without shots being fired, in scuffles, or if there had been panic among the thousands gathered at the border crossing," he told Der Spiegel.

"That's why I gave my people the order: Open the barrier!"

Thousands flowed through, celebrating and crying, in scenes beamed around the world. Many climbed the wall at Berlin's Brandenburg gate, chipping away at the wall itself with hammers and pickaxes.

A turbulent year had reached a climax.

Why did the Wall come down?

After World War Two, Europe was carved up by the Soviet Union and its former Western allies, and the Soviets gradually erected an "Iron Curtain" splitting the East from the West.

Defeated Germany was divided up by the occupying powers - the US, UK, France and the USSR - with the eastern part occupied by the Soviets. East Germany, officially known as the German Democratic Republic, became the Soviet Union's foothold in Western Europe.

But Berlin was split four ways, with British, French and American zones in the west of the city and a Soviet zone in the east. West Berlin became an island surrounded by communist East Germany.

The wall was eventually built in 1961 because East Berlin was haemorrhaging people to the West.

By the 1980s, the Soviet Union faced acute economic problems and major food shortages, and when a nuclear reactor at the Chernobyl power station in Ukraine exploded in April 1986, it was a symbolic moment in the impending collapse of the communist bloc.

But events moved far faster than he could have foreseen.

Reform movements were already stirring in the communist bloc. Years of activism and strikes in Poland culminated in its ruling communist party voting to legalise the banned Solidarity trade union.

By February 1989, Solidarity was in talks with the government, and partially free elections in the summer saw it capture seats in parliament. Though the Communists retained a quota of seats, Solidarity swept the board wherever it was allowed to stand.

Hungarians, too, launched mass demonstrations for democracy in March. In May, 150 miles (240km) of barbed wire were dismantled along the border with Austria - the first chink in the Iron Curtain. Hungary's 1956 revolution was brutally suppressed by the Soviets, but this was succeeding.

By August, the revolutionary wave had truly re-ignited on the fringes. Two million people across Estonia, Latvia and Lithuania - then part of the Soviet Union - held one of the most memorable demonstrations of the so-called Singing Revolution when they formed a 370-mile (600km) human chain across the Baltic republics calling for independence.

In the heat of August, Hungary opened it borders to Austria in the west, allowing East German refugees an escape.

The Iron Curtain was buckling.

Czechoslovakia, whose push for liberalising reform had been brutally suppressed in 1968, provided another means of escape. East Germans could travel to the neighbouring socialist nation without restriction, and began to flood the West German embassy there by the hundreds, eventually being evacuated to the West by train.

East Germany ended up closing its border with Czechoslovakia in October to stem the tide.

But by then the revolution had spread to East Germany itself.

It began with demonstrators rallying for freedom in the centre of the city of Leipzig.

On 9 October, within days of East Germany celebrating its 40th anniversary, 70,000 people took to the streets.

There were calls for free elections from West Germany, and talk of reform from East Germany's new communist leader Egon Krenz. No-one knew the fall of the Wall was weeks away.

In late October parliament in Hungary, which had been among the first to hold mass demonstrations, adopted legislation providing for direct presidential elections and multi-party parliamentary elections.

And then on 31 October, the numbers demanding democracy in East Germany swelled to half a million. Mr Krenz flew to Moscow for meetings - he recently told the BBC that he had been assured German reunification was not on the agenda.

On 4 November, a month after the East German protests had begun, around half a million people gathered in Alexanderplatz in the heart of East Berlin.

Three days later, the government resigned. But there was no intention to give way to democracy and Egon Krenz remained head of the Communist Party and the country's de facto leader.

He would not be there long. Five days later, Mr Schabowski gave his world-changing press conference.

Why didn't the Soviets use force?

Earlier in '89, Beijing demonstrators in Tiananmen Square who had called for democracy in China were crushed in a major military crackdown.

The USSR had used its military to put down rebellions before. So why not now?

Within the Soviet Union itself, it did, killing 21 pro-independence protesters in the Soviet republic of Georgia. But elsewhere in the communist bloc, they did not.

In a break with Soviet policy, Mikhail Gorbachev decided against using the threat of military might to quell mass demonstrations and political revolution in neighbouring countries.

"We now have the Frank Sinatra doctrine," foreign ministry spokesman Gennady Gerasimov told US television. "He has a song, `I (Did) It My Way.' So every country decides on its own which road to take."

A new chapter in European history

On 3 December, Mr Gorbachev and US President George HW Bush sat side by side in Malta, and released a statement saying the Cold War between the two powers was coming to a close.

The 1989 wave of revolutions was not over yet.

In Romania, demonstrations ended in violence and saw the fall of communist dictator Nicolae Ceausescu. A new government took over as the ousted leader fled his palace and angry crowds stormed it.

He and his wife Elena were captured and executed on Christmas Day. More than 1,000 people were killed in unrest before and after the revolution, setting Romania apart from the largely bloodless events elsewhere.

And the Soviet Union itself?

In 1990, Latvia, Lithuania and Estonia took advantage of their new-found political freedoms to vote out their communist governments and make moves towards independence. The Soviet Union was falling apart, but Mr Gorbachev made one last ill-fated attempt to reform it by calling together the leaders of the 15 Soviet republics.

Hardline communists opposed to his reforms pre-empted him, attempting a coup while he was on holiday in Crimea in August 1991 and putting him under house arrest.

The coup was defeated in three days as pro-democracy forces rallied round Boris Yeltsin, president of the Russian republic.

But it was the death knell for the USSR, and one by one its constituent republics declared independence. By the end of the year the Soviet flag had flown for the last time.