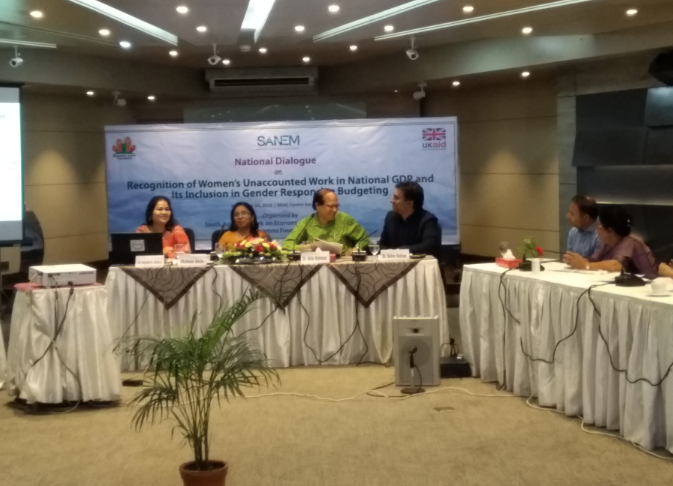 Speakers at a dialogue on Monday stressed the need for recognising the contribution of women’s unaccounted work to the economy.

They also called upon the government to arrange more awareness programmes for recognising women’s unpaid works and reducing discrimination.

The national dialogue was organised by South Asian Network on Economic Modeling (SANEM) in partnership with Manusher Jonno Foundation (MJF) at the BRAC Centre Inn in the capital.

Dr Selim Raihan, Professor of Economics department at Dhaka University and Executive Director of SANEM, said, “If we look at the government’s labour force survey, we see that the female labour force’s participation rate is 36 percent, which has been stagnant from 2010 while the male participation rate is above 80 percent. The problem is not only on supply side, but also on the demand side. The main issue regarding the supply side is the household care burden carried out by women.”

He also said the valuation of non-labour market household care work is important because it is important to acknowledge the contributions of women’s unaccounted household works to dignify those in the male-dominated society. “Our purpose is to create awareness and change the perception of the policymakers, academicians and civil society.”

MJF executive director Shaheen Anam said, “The reason why we came with this idea was to uphold her status in the family and in the society in order to eradicate the discrimination and violence against women. Women’s works are mostly reproductive and productive; we hardly recognise their productive works. These works should be given a formal recognition through calculating its share in the GDP.”