No to smart, yes to risk as push traffic system fails 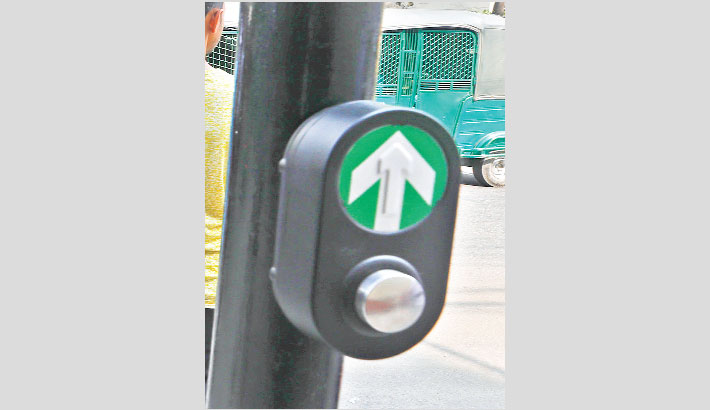 The aim of installation of the push button countdown road crossing signal is to ensure safe passage for pedestrian when they cross the road and making road crossing friendly for the pedestrians especially women, children and the physically challenged.

But due to lack of know-how of the push button countdown system it has failed as drivers and pedestrians continued the old risky practice.

The failure was blamed on Dhaka North City Corporation (DNCC) and the traffic branch of the Dhaka Metropolitan Police who did not carry out any move to make them popular.

Though DNCC mayor said that the traffic control room will monitor the CCTV cameras installed in front of Green Herald School to identify those who break traffic rules, and whoever violates the traffic rules will be fined as per the law, none to be found being fined.

Even, no law enforcing authorities was found on the spot.

Pedestrians told this correspondent that despite pushing the button, vehicles oes not  stop and they were forced to jaywalk.

While many don’t know the meaning of installing of the smart signal despite a large signboard nearby giving instructions to vehicles and pedestrians.

Talking to the correspondent, Ashraful Islam, an honors student said, “I saw on Independent Television and knew about it but when I push the button to cross the road vehicles did not stop.”

“We want to cross the road abiding by the rule but we have to no way,” he repented.

Abdul Salam, another pedestrian who crossed the road without pressing button said, “I don’t use of the button because I don’t know how to use it.”

Mahbul Alam, a security guard of St Francis Xavier’s Green Herald International School said, “People mostly don’t push the button because it has no use as traffic do not stop here. When students of our school pass the road in the morning our two guards stand on both sides of the road and help students to cross.”

This correspondent telephoned DNCC superintendent engineer of traffic engineering department Mohammad Arifur Rahman, but he did not respond

For crossing the road, one has to push the button installed both sides of the road, wait for 27 seconds for stopping the vehicles.