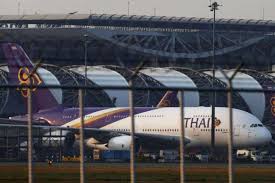 Thai Airways has disclosed that its chairman has resigned as the carrier struggles with financial challenges.

The airline said Friday that Ekniti Nitithanprapas resigned as of November 1.

The company's president recent drew criticism for saying the company was in crisis and might have to close if its employees do not cooperate with a rehabilitation plan.

It said a slowdown in tourism in Thailand and in the global aviation market were factors behind a 10% decline in revenue from a year earlier.