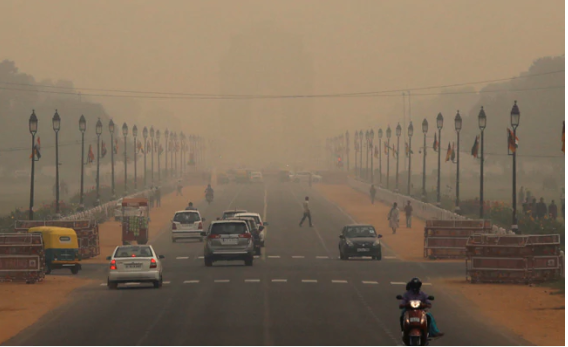 An unprecedented public health emergency has been declared in Delhi and nearby areas by the Indian pollution control body mandated by the Supreme Court, as the region has been trapped in a toxic smog since Diwali. Schools in Delhi will be closed till Tuesday, November 5,Delhi Chief Minister Arvind Kejriwal tweeted.

Schools in the capital have been asked to stop all outdoor activities and sports till November 5 to minimise exposure of children to pollution.

The Environment Pollution (Prevention and Control) Authority (EPCA) has also banned construction activity till November 5 as the pollution level in the region entered the "severe plus" or "emergency" category late Thursday night, the first time since January.

The pollution authority has also banned the bursting of crackers during the winter season.

Chief Minister Kejriwal today described the city as a "gas chamber" while distributing masks to schoolchildren. He also blamed the neighbouring states of Haryana and Punjab, where thousands of farmers at this time of year burn crop stubble, sending vast clouds of smoke drifting across northern India.

If the air quality continues to be in the "severe plus" category for more than 48 hours, emergency measures such as odd-even car rationing scheme and banning entry of trucks are taken under the Graded Response Action Plan, the official said.

"People have also been advised to not exercise in the open till the pollution level reduces and special care should be taken of the children, aged and vulnerable population. "This is a grave situation and I am hoping for your personal intervention so that there is stringent enforcement and full compliance with the directions issued," EPCA chairperson Bhure Lal said.

The high level of hazardous, lung-damaging pollutants has prompted a large number of residents to wear masks for morning walks and to work.

Union Environment Minister Prakash Javadekar accused Mr Kejriwal of playing blame-game over rising pollution levels in the city state and said blaming Punjab and Haryana will  not solve the problem. "Instead of blaming Punjab and Haryana, he would think about (Prime Minister Narendra) Modi-ji's proposal to curb pollutants produced by industries in five states (near Delhi)."

Delhi is one of the world's most polluted cities and each winter, seasonal crop stubble burning, dense cloud cover and smoke from millions of Diwali firecrackers turn its skies a putrid yellow.