World Bank to provide $100m loan for watsan in 30 municipalities 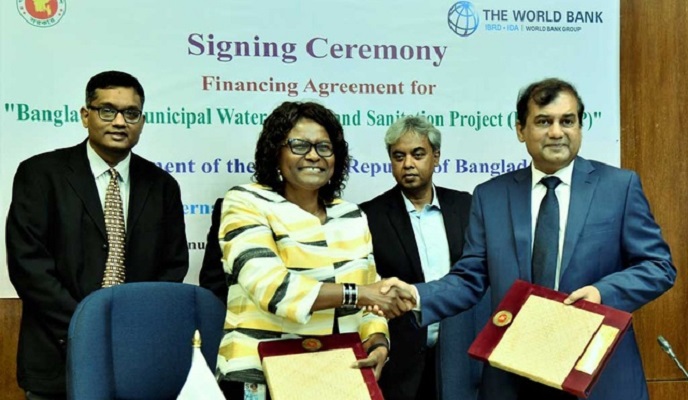 Bangladesh will receive $100 million loans from the World Bank to improve the water supply and sanitation system in 30 municipalities to benefit some 6 lakh people.

Economic Relations Division (ERD) signed a loan deal with the Washington-based lender with regard to this in the capital on Wednesday.

The money will be utilized for Municipal Water Supply and Sanitation Project that the government will implement at a cost of US$209.53 million

The project will provide safe piped water to residents of selected municipalities that currently do not have piped water facilities. Sanitation and drainage systems will be improved as well.

“This project will help the people living in small towns, including the slum dwellers get piped water and improved sanitation and drainage services. With greater access to clean water, the women will have more time otherwise spent for collecting water, as well the health of their children will improve resulting in better school attendance,” the WB country director added.

The project will help construct public toilets. It will invest in septage management and disposal, as well as provide training for cleaning workers in fecal sludge management. It will also identify and mitigate measures for critical areas prone to flooding.

In its Sector Development Plan and the National Strategy for Water Supply and Sanitation, the government has aimed for 85 to 90 percent piped water supply coverage in municipalities by 2025, Monowar Ahmed informed.

The credit from the International Development Association (IDA) of WB has a 30-year term, including a five-year grace period, and carries a service charge of 0.75 percent and an interest of 1.25 percent.