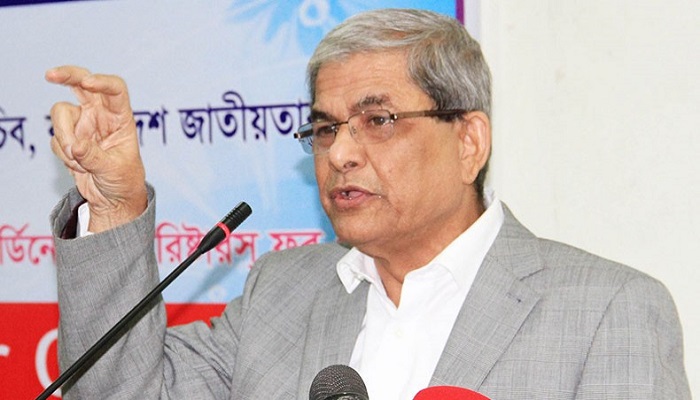 BNP Secretary General Mirza Fakhrul Islam Alamgir on Monday termed the government’s ongoing purification drive as a mockery alleging that masterminds of corruption and the real offenders are still out of reach.

Mirza Fakhrul came up with the remarks while speaking at the triennial conference of Thakurgaon district unit Jatiyatabadi Krishak Dal at Mirza Ruhul Amin Auditorium today.

The BNP leader, “It makes me laugh when the government talks against corruption. Those who fear people’s votes and don’t allow people to cast votes, they’ve now launched a purification drive.”

He alleged that the government is trying to improve its image by arresting only a few ‘small fry’ in the current anti-corruption drive.

“A cleansing drive is going on in the country… it means you’re admitting that you’re not pure as you’re bogged down in mud and dirt. Are you trying to purify yourselves by catching some small fry? Where are the masterminds of the casino business and the real offenders?” he questioned.

“The banking sector has been ruined with widespread plundering. Huge money has been looted from the share market while thousands of crores of taka has been siphoned off as there’s no rule of law in the country,” Fakhrul went on.

The BNP leader said no legal action was taken against the Bangladesh Chhatra League (BCL) president and general secretary who have been removed from their organisation for their reported involvement in extortion of money.

He said the BCL men set up torture cells at universities while they beat BUET student Abrar Fahad to death for taking position in favour of the country’s interests.

Fakhrul said framers are now getting demoralized as they are being deprived of fair prices of their produces. “They didn’t get the fair prices of paddy and they’re also facing a crisis with potato. So, the farmers are getting discouraged to cultivate their land. The government is trying to turn Bangladesh into Singapore by destroying the agriculture sector.”

As a student of economics, he said the country’s GDP growth will be accelerated if the farmers grow crops and get fair prices.

The BNP leader said the country was liberated with the objectives of establishing democracy, people’s rights, good governance and justice.  “What are we now seeing? We can’t raise our voice and we’re not getting justice. “

Claiming that their party chairperson Khaleda Zia has been kept in jail in false cases, he said she is not released on bail though she deserves it. “She’s deprived of her basic rights.  She’s very sick, but not getting proper treatment.”

At the conference, a 71-member committee of the Thakurgaon unit Krishak Dal was formed making Anwarul Haque its president while Kurshid Alam Ujjal its general secretary.