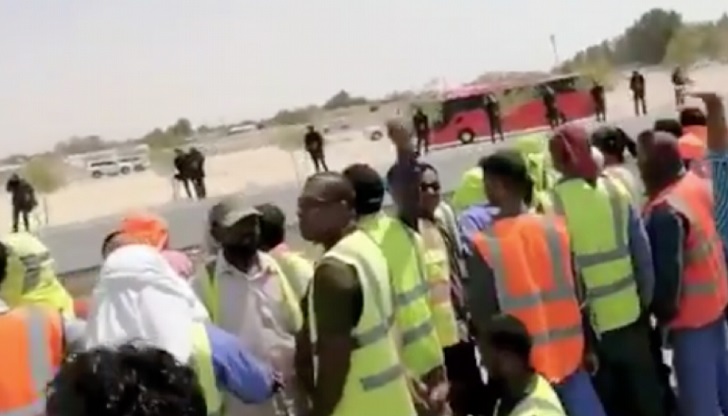 In the wake of a massive crackdown by Saudi Arabian law enforcers, many Bangladeshi poor workers, some of who carrying valid papers, continued to be deported making the poor more poor than they were before going to the desert kingdom to make a fortune.

Separately, many women fortune-seekers also fled from Saudi Arabia with stories of horror after suffering torture and sexual abuse by their employers were left with uncertain lives as they were not paid lost every asset they had at home.

Since Friday, 373 Bangladeshis were deported from the oil-rich kingdom taking the total to 18,000 in the past one year with many having legal papers to work there.

“A worker counts around Tk 8 lakh to Tk 10 million for managing overseas work, however, most of the agencies and officials forget them after they flying off. Many workers returned despite having Akama (work permit),” said Shariful Islam Hasan Sharif Migration Programme Head of the world’s largest non-governmental organization Bangladesh Rural Advancement Comity (*BRAC). He added that the government should strengthen policy to deal with the situation.

The Saudi authorities have arrested around 3.8 million foreigners in its crackdown on day workers  and residency violators since 2017, according to a report of the official Saudi Press Agency (SPA).

On the other hand, many of these women had escaped from their employers’ houses without passport and returned to Bangladesh with support from the Bangladesh Embassy in Saudi Arabia, victims alleged.

Yunus Ali, 65, father of Halima, one of the three, told the daily sun from Sunamganj district over telephone that his  daughter went to Saudi Arabia a year ago and had to change her workplace thrice during the period.

“When she talked to me three to four months ago, she said she was in trouble. Her employer abused her. I don’t know what type of abuse…,” said Yunus, a day worker.

“Halima was 18 years old when she went to Saudi Arabia. I had told broker Raju Mia that Halima was young, but he said it was not a problem,” said Yunus about his eldest daughter.

Another victim Dalia was tortured, both physically and mentally, while working as a domestic worker in the kingdom.

She broke both her hands and legs when she tried to flee her employer’s home by jumping from the second floor and was then treated at a Riyadh hospital for two months before returning home with the help of the Bangladesh embassy.

Dalia was in Saudi Arabia for 14 months. She said there were around 400 women at the safe home, all victims of different sorts of physical and sexual abuse.

Since the incidents of women abuse continued, the government banned sending domestic workers below the age of 25 years.

According to the migrant programme of BRAC, about 800 women workers returned from Saudi Arabia in the past eight months. Many of them were tortured or returned due to lack of security.

DM Atiqur Rahman, director (employment) at the Bureau of Manpower, Employment and Training (BMET) told journalists that they ensured swift return of the women if there was a case of abuse.

About 80 per cent of the women going overseas as domestic workers go to Saudi Arabia.

Officials in Dhaka and Riyadh have recorded the causes of female workers’ return as abuse, torture, overload of domestic works, denial of wages, job termination, denial of sufficient food, illness and home sickness.

The Middle Eastern kingdom country signed a contract with Bangladesh in 2015 after Indonesia and Philippines stopped sending domestic workers  following accusations of oppression. Until July this year, about 300,000 women workers went to the country.

Expatriates Welfare and Overseas Employment Ministry’s Secretary recently said: “Most of the Bangladeshi women workers in Saudi Arabia are working happily and those returning home were coming back after failing to cope up with the local environment and culture.”

According to official data, there are around 2.25 lakhs of expatriates returned home from different countries mostly from Middle East in last one decade.

In 2019, there are around 35 expatriate workers returned from different countries of which 25 thousands from Middle East including 18 thousands from Saudi Arabia, Bangladesh’s major overseas labor market.

BRAC’s Shariful Islam Hasan said the situation of Bangladeshi workers have been  worsening abroad due to the recruiting agencies who only focus on sending workers rather than working for their welfare.

“It (send back) is not new for Bangladeshi workers as the country’s migration policy has several loopholes in ensuring workers’ welfare. Besides, the Bangladeshi diplomatic offices abroad should coordinate with requiting agencies for sake of ensuring workers’ benefit,” Hasan told the Daily Sun.

He said workers went about without verifying papers given by the agencies and then lose everything.