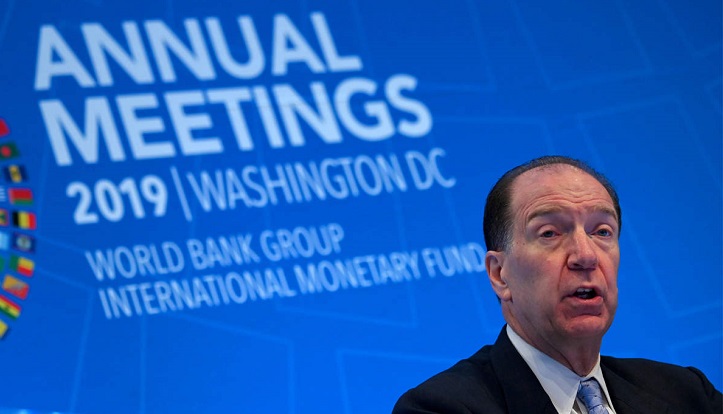 According to him on Saturday, India had made "strong progress" in reducing extreme poverty and implementing market-oriented reforms over the past three decades.

This is Malpass' first visit to this south Asian country after assuming the world institution's top post in April.

"Encourage progress in three primary areas - One is to allow the growth of the banking sector itself including the private sector. Second is deepening of corporate bond market and mortgage market, and the third is regulation of non-bank financial companies which have grown with the Indian financial system but entails some risks," the World Bank chief was quoted as saying while speaking at an event in the Indian capital.

"Prime Minister Modi has a goal of 5 trillion U.S. dollar economy, and it will be assisted by innovation in the financial sector."

Commenting on India's economic slowdown, the World Bank president said that the county had been "affected by the global environment" and slowed from fast growth in earlier years.

Notably, India's economic growth had hit a six-year low of 5 percent during the first quarter of the current fiscal year. Recently, both the World Bank and the International Monetary Fund (IMF) had cut the Indian economy's projected growth rates to around 6 percent during the financial year 2019-2020.

Openness to reform, innovation, improvement in government structure would pave the way for a faster economic growth, said Malpass.

The World Bank Group president is visiting India from Friday to Monday at the invitation of the government of India. The focus of his visit is on understanding the emerging priorities of the Indian government as it strives to boost growth meeting people's aspirations, and developing partnership with the World Bank.