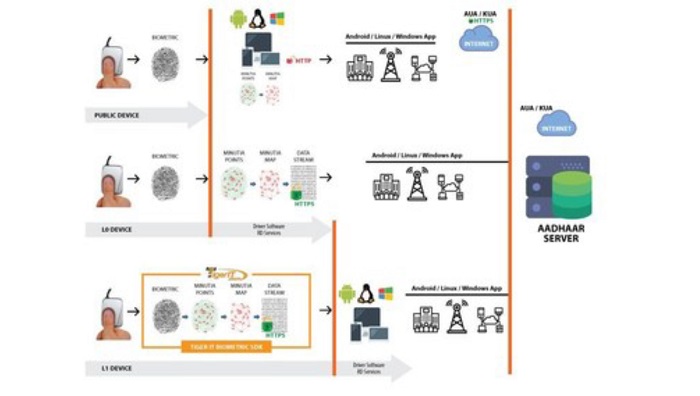 TigerIT's biometric software (SDK) in combination with Renesas semiconductors have secured Aadhaar's ecosystem by becoming the only approved device that has passed the strictest security and privacy compliances in India.

Privacy and data security are the new tech buzz words on social media as we feel its impact on every aspect of our lives, from fraudulent banking transactions to stolen identities. Many users fall victim to the acts of hackers and fail to protect their data in this connected world. The scandals at Facebook, Amazon and other social media giants have pulled the attention of common folk towards this issue. This growing awareness has raised several questions on the policies and security practices of the data collection agencies. India's national ID project Aadhaar, having collected the largest amount of biometric data, too dealt with heavy criticism for failing to meet security standards of the 21st century.

The Supreme Court of India questioned the validity of Aadhaar, which contains all personal information about an individual including their iris scan and fingerprint data, in linking with an individual's banking, the mobile operator as well as welfare and insurance schemes, all of which are perfect ingredients for committing identity theft. The lack of security resulted in the Apex Court overruling the diktat by the ruling government of India which made the submission of Aadhaar mandatory for several services.

To overcome this problem Renesas together with TigerIT (a renowned Bangladeshi IT company) have developed a device and software, which are first to fill the data security lacunae for the Aadhaar project.

Md Nasiruddin Ahmed, a scientist at TigerIT, explains that the device is embedded with NIST certified biometric SDK and asymmetric encryption that is impossible to break. The device only releases encrypted biometric information that can only be decrypted on the server. This will prevent fraudsters from getting access to any biometric data during the process of authentication.

The ground-breaking biometric solution and key management within the chip of the device blocks the possibility of biometric data theft. TigerIT found an innovative way to secure the world's largest amount of biometric data ever collected. To protect users from being at risk, this technology creates minutiae and encrypts the biometric information at source, hence, preventing hackers from gaining direct access to the treasure trove of data, and at the same time maintaining its effectiveness by authenticating a match with the data stored on the server. The solution of TigerIT and Renesas is already certified by Aadhaar, and it is the first device having such certificate.

New devices will come with microcontrollers having a secure ID that will provide accurate information about data collection which in the previous cases remain untraceable. They will also restrict the possibility of manipulation at the operator's end to avoid creation of fraudulent Aadhaar cards and numbers without being detected.

According to projection several million units of this new device with the software will be sold in the Indian market alone.

Md Nasiruddin further said, "We are also thinking how this technology can be beneficial for our country. It should replace the existing verification service to offer better privacy and security of citizens' data."

Other than India and Bangladesh, there are many countries adopting biometrics for their citizen ID for various purposes. Brazil, Canada, China, France, USA, UK and EU countries are all in the league and therefore are potential markets for this product.

Incorporated in 2002 by Hitachi, Mitsubishi, Toshiba and later joined by NEC Corporation Renesas Semiconductors is one of the frontrunner in the semiconductor industry.

It has manufacturing, design and sales operations in around 20 countries. It was the world's largest auto semiconductor maker in 2014, and the world's largest maker of microcontrollers. It also makes mixed-signal integrated circuits and system on a chip.