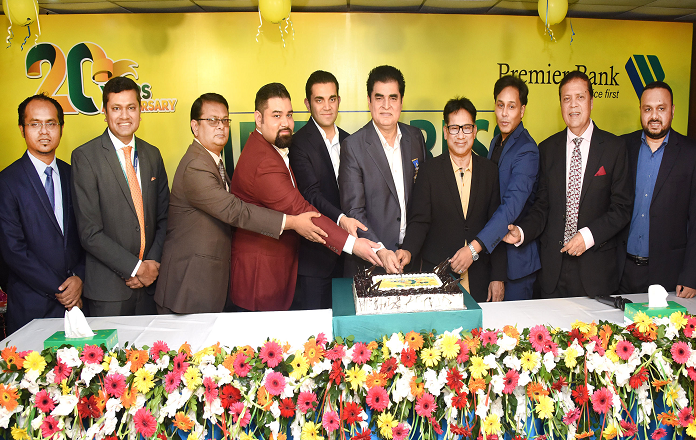 The Premier Bank Limited celebrated their 2 decades of successful operations on Saturday, October 28, at a spectacular event held under the banner of “Celebrating 20 years of Prosperity”. The event, held at the bank’s head office, was inaugurated by the Premier Bank’s founder Chairman, Freedom Fighter Dr. H.B.M. Iqbal along with the presence of Vice Chairman Moin Iqbal, member of the Board of Directors Abdus Salam Murshedy, MP; Mohammad Imran Iqbal, Jamal G Ahmed. The event rejoiced all the significant milestones along their 20 year journey with special emphasis on how they are proud and humbled to have played an important role in transforming the economic sector and facilitating the development of the country as a key financial player. It is this role that has contributed to earning the trust, appreciation and respect of the people and other organizations as one of the leading private banks of today.

Dr. H.B.M. Iqbal, who is a renowned Freedom Fighter and one of the pioneers of the country’s financial sector, led the celebrations of the day as the events Chief Guest. Joining him as the respected special guests were Mr. M. Reazul Karim (FCMA), the Managing Director and CEO of the Premier Bank, and Mr. Muhammed Ali, advisor to the bank. Representatives of different media houses, patrons and well-wishers from various industries, distinguished members of society and a multitude of high-ranking veterans of the financial sector graced the occasion with their presence and applauded this historic milestone of the Premier Bank.

Speaking on the occasion, Chairman Dr. H.B.M. Iqbal said, “Ever since we started way back in 1999, we strove every single day to perform our best and keep our promise of “Service first” which has helped us rise to a position of trust today - while earning love and respect of the masses. Our bank has been playing an important role in the development of various sectors of the country and we have experienced wide success in many different aspects. But, without your help and support for the last 20 years, we would not have reached today's position.”

The Managing Director and CEO of the bank Mr. M. Reazul Karim (FCMA) thanked everyone and said, “This path of prosperity will continue. At present our non-performing loan is below 5% and premier bank has also developed in other parameters. Compared to previous year, our deposit has also increased by 22%, profit by 15% and remittance by 54%. We hope that in next five years, premier bank will be among the top most profitable bank by achieving all the parameters.”

Advisor of the bank, Mr. Muhammad Ali further added, "Bangladesh is moving forward with the goal of becoming a middle-income and a prosperous country by 2021. Under the guidance and leadership of the Honorable Chairman and the financial visionary Dr. H.B.M. Iqbal, the Premier Bank will play an even bigger role as Bangladesh’s growth partner as we continue adopting and implementing bolder and more progressive development strategies.”

After several inspiring speeches and various cultural performances, the celebration of the Premier Bank's 20th anniversary of its prosperity was concluded - with a promise of 20 more years of success and shared prosperity to come.