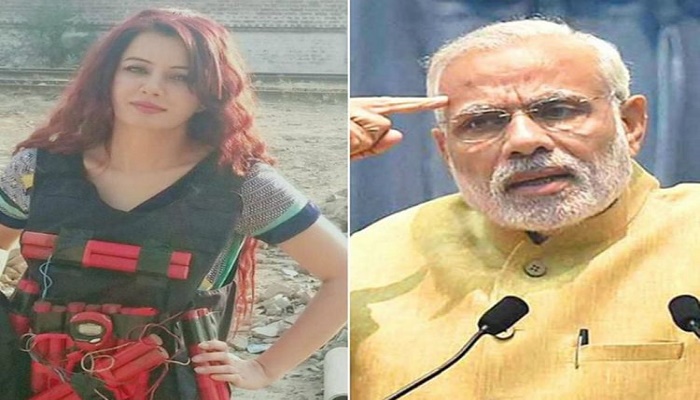 Pakistani pop singer Rabi Pirzada, who had earlier gained notoriety for threatening Indian Prime Minister Narendra Modi over the revocation of Article 370 - which granted special status to Jammu and Kashmir, has now launched a new attack on the Indian PM.

This time, the singer is threatening PM Modi with a suicide attack.

In a tweet posted on Tuesday, Rabi Pirzada posted a photo of herself in what seemed like a bomb vest, reports News 18.

Earlier in September, Rabi Pirzada made headlines for appearing in a video in which the singer could be seen posing with snakes and alligators in an otherwise empty room - saying that the reptiles were "gifts" for  Modi. She then warned Modi and the rest of India or dire consequences unless something was done about Kashmir.

Her video didn't go unnoticed and Pirzada later faced charges by the Punjab Wildlife Department for alleged violation of law by keeping prohibited exotic animals — some rare cobras, snakes, a lion and a crocodile — as pets.

According to reports, under the Punjab Wildlife (Protection, Conservation and Management) Act of 1974 (amended 2007), possession of such animals is illegal and can lead to imprisonment of two to three years or a fine of up to Rs 20,000.