It's a new start for the BCCI: Sourav Ganguly 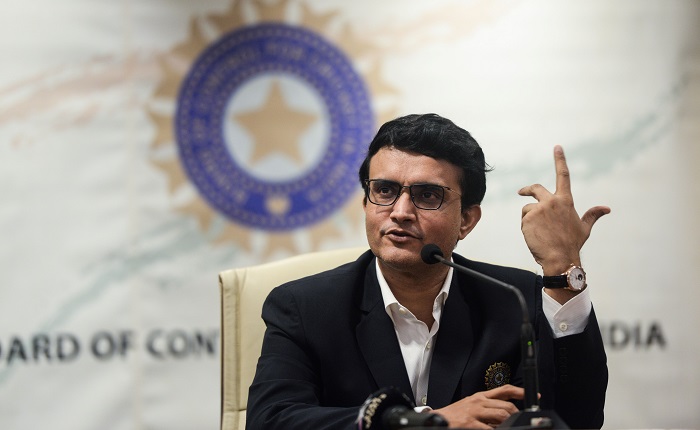 Former cricketer Sourav Ganguly, newly-elected president of the Board of Control for Cricket in India (BCCI), speaks during a press conference at the BCCI headquarters in Mumbai on October 23, 2019. Former captain Sourav Ganguly was unanimously elected on October 23 as president of India's troubled cricket board, the sport's most powerful body. –AFP

The significance of the day was not lost on new BCCI President Sourav Ganguly. The former India captain took charge as the 39th board president donning the same navy blue blazer he'd been given when he was named full-time captain of the Indian Test team.

Ganguly likened the challenges of his new role to his elevation as India captain in the aftermath of the match-fixing scandal, stating that he had to set things in order once again after 33 months of administration by the Committee of Administrators.

"It's an honour that I've been asked to take this role by the members. It's a new start for the BCCI," Ganguly said on Wednesday. "Coincidentally - fortunately, or unfortunately - when I became captain, it was a similar sort of a situation and I captained India for six years. And this is a similar sort of situation that now things need to be brought back in place, reforms need to be done, huge amounts of money needs to be paid to state associations. So it's a completely new start. From that point of view, I find myself in a position where I can make a change, and it's a challenge.

"We don't know what's happened in the last three years, there was no AGM or working committee meeting, there were no committee meetings so we have no idea how it has happened. So we'll take note of everything and then do what is required for BCCI and Indian cricket. We all must understand that we're here to work for Indian cricket, that's what's the job of the BCCI. The game on the field - international cricket, domestic cricket, IPL cricket, and we will do that to the best of our abilities," he added.

'Will give everything for Kohli's team to be the best'

"He wants to make this team the best in the world. It's been a great team to be honest with you, the way we have played cricket in the last three-four years. It's a fantastic side, yes, you can say they haven't won the World Cup but you don't win World Cups every time. We'll support him for whatever he wants and make sure that Indian cricket goes ahead smoothly."

When I was the captain and Jagmohan Dalmiya was the president, I don't remember a day when he said no to anything. Likewise, when [N] Srinivasan was the president and [MS] Dhoni was the captain, you know how the relation was good. Virat is the captain now and his relation with me will be the same. Whatever he will require for the betterment of Indian cricket, he will get. He is a very big player... see his game in the last four to five years, he has taken Indian cricket to a different level. We are with him and we will remain with him. We will give him everything for his team to be the best," Ganguly added.

Top of Ganguly's to-do list in his new role of power is to ensure the pink health of India's premier domestic competition - the Ranji Trophy, whose quality, it is argued, has diluted somewhat after the inclusion of new states and union territories as per the Lodha recommendation. Ganguly said he was willing to overcome the logistical challenges of hosting more than 2000 domestic games in a season to ensure that the supply line to the national team is not compromised.

"That will be the first thing we'll do and we'll get it done before the actual Ranji Trophy season starts," he said. "The structures are there, the tournaments are there. In the last three years, the [no.of] matches have doubled actually. When I played for Bengal and some of my colleagues played for the other states there were about 1000 games to be played at.

"Now there are 2000 games between states and the affiliates. So we have to account for it. We have to make sure the best tournament in the country is competitive, and it remains important to everyone now because that's where you get the Kohlis and MS Dhonis, Ajinkya Rahanes and Rohit Sharmas of Indian cricket. So that structure has to be the best and both structure-wise and financially and that will happen. That will be the first thing that will be done by the apex council. As I said, we are here to accommodate and make sure most importantly the cricketers are at ease to play the game, whether it is first-class cricket, Test cricket, women's cricket or the IPL. The biggest goal we have is to make their life lot more easier with performance."

Ganguly revealed he was yet to have a conversation with MS Dhoni about the latter's future in international cricket but called the stumper a "champion", invoking a callback to the second-wind of his own career after he was dropped in 2006 during the tenure of erstwhile India coach Greg Chappell.

"I have taken over today and hopefully we will have a word with one of the greats of Indian cricket [Dhoni]," Ganguly said. "It depends on him. Even when I was left out and when the entire world said he will never make it, I believed in myself and came back and played for four years. Champions don't finish quickly. I don't know what is in his mind, what he thinks about his career. We will leave at that. He is one of the greats of the game. Over a period of time, his achievements, when you sit down and take note, you say wow. So, when I am around, everybody will be respected.