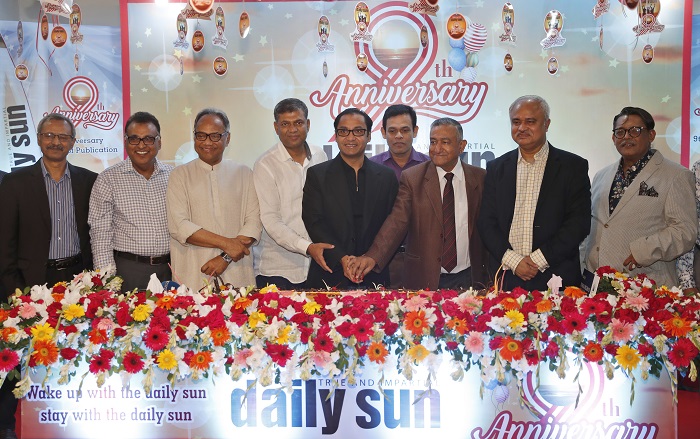 The daily sun, a national English newspaper and a media outlet of the East West Media Group Ltd, has stepped into the tenth year of its publication with a fresh pledge to project positive image of Bangladesh across the world.

The new-generation English broadsheet started its journey on October 24, 2010 with the slogan, ‘true and impartial’ and continued effort to produce news on both broadsheet and online versions.

“The Daily Sun has excelled in team work to present impartial news. I hope the newspaper will do better in the future,” he said.

Regarding the celebration, Editor Enamul Hoque Chowdhury said the daily sun has been maintaining standard in news gathering and operations since its inception and gaining increasing readership at home and abroad.

“We practice objective journalism to project positive stories of Bangladesh globally. A group of experienced news professionals along with young journalists have given their efforts to bring the newspaper to new height. The anniversary occasion brings opportunities for us to celebrate the success stories together with readers and patrons,” he added.

The newspaper authorities have undertaken a two-day programme. A day-long get-together will take place at its head office on the East West Media Group Ltd premises in Bashundhara Residential Area in the capital to be participated by readers, patrons and well wishers.

During last nine years of news operations, the newspaper has showed excellence in gathering and presenting news and introducing a new style which resulted in huge popularity among English news readers at home and abroad.