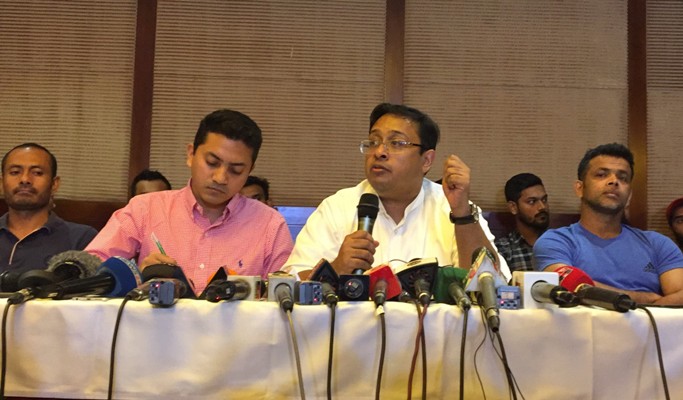 Placing a 13-point demand afresh, striking Bangladeshi cricketers on Wednesday said they were ready to sit with the Bangladesh Cricket Board (BCB) to discuss their demands.

On behalf of the cricketers, Supreme Court lawyer Barrister Mustafizur Rahman Khan came up with the information while briefing reporters after a meeting of the cricketers at a Gulshan hotel in the evening.

He said the cricketers will go to the BCB tonight (Wednesday night).

With this, the move of the cricketers, the current crisis of Bangladesh cricket has taken a new turn.

Most of the national players were present at the press conference. No cricketer, however, talked to the media.

The demands include a share from the profits of the BCB for them, immediate resignation of the president and secretary of Cricket Welfare Association of Bangladesh (CWAB), returning to the previous model of Dhaka League, and the BPL from the next year, increasing the match fee in the first-class cricket to 1 lakh from present Tk 35,000, hiking the salaries of the national cricketers, local coaches, physios, trainers and groundsmen, arranging more domestic cricket events, fixing stable domestic calendar, clearing cricketers’ dues for the Dhaka League and ensuring cricketers’ opportunities to play more foreign leagues.

On Monday, the cricketers placed an 11-point demand and announced that they will not take part in cricketing activities unless their demands were met.