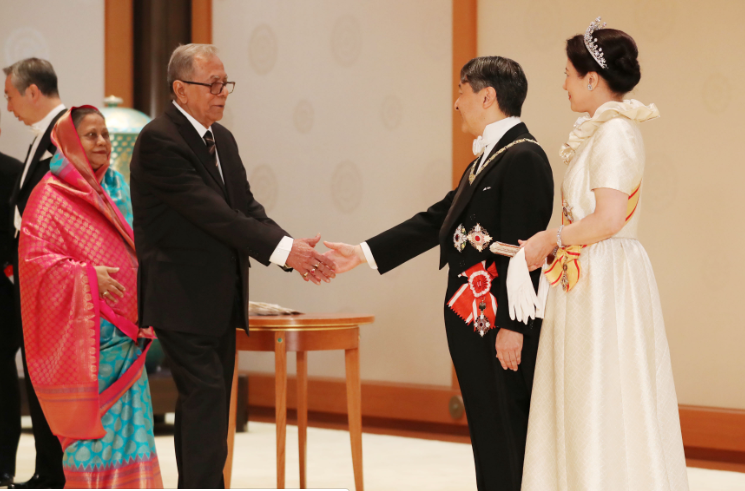 President Abdul Hamid invited Japanese Emperor Naruhito and Empress Masako to visit Bangladesh on the occasion of celebrating the 50 years of successful bilateral ties in 2022.

Hamid extended the invitation verbally while greeting the Emperor and Empress during the post-enthronement ceremony banquet at Imperial Palace last night.

On the sidelines of the banquet, the President also greeted the Emperor, wishing his long life, President's Press Secretary Joynal Abedin told UNB on Wednesday morning.

The President also exchanged pleasantries with some other heads of state and government.

First Lady Rashida Khanam and Bangladesh Ambassador to Japan Rabab Fatima accompanied him at the main part of the ceremony.

The ceremony took place at the State Hall of Imperial Palace at 1pm (local time) on Tuesday.

The enthronement ceremony was held as part of national ceremony (from Oct 22 to October 31) to celebrate the enthronement of the emperor. Some 2,000 people, including heads of state and other dignitaries from 174 countries attended the ceremony.

He passed some time in Yamashita Park and NYK Maritime museum inside the Hikawa Maru, a passenger liner that was built in 1930 for the Japan-Seattle line by NHK line.

The President will also attend a banquet to be hosted by Japanese Prime Minister Shinzo Abe at Hotel New Otani on the same day, as part of the ceremony.

President Hamid reached Tokyo on Monday on an eight-day official visit to Japan and Singapore. He will visit Singapore from October 25-27 on his way back home.

He is expected to return home on October 27.