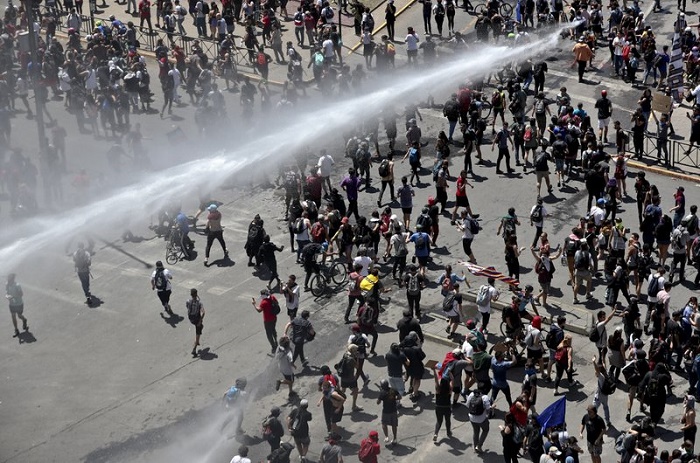 Rioting, arson attacks and violent clashes wracked Chile for a fifth day Tuesday, as the government raised the death toll to 15 in an upheaval that has almost paralyzed the South American country long seen as the region's oasis of stability.

About half of Chile's 16 regions remained under an emergency decree and some were a under military curfew, the first — other than for natural disasters — imposed  since the country returned to democracy in 1990 following a bloody 17-year dictatorship.

Unrest sparked last week when a relatively minor, less-than-4% rise in subway fares led to students jumping station turnstiles in protest. But the defiance exploded into violence Friday with demonstrators setting fire to subway stations, buses and a high-rise building. Demonstrations escalated with wide-ranging demands for improvements in education, health care and wages, and spread nationwide, fueled by frustration among many Chileans who feel they have not shared in the economic advances in one of Latin America's wealthiest nations.

"I fight so that all that will end and so that all of us will have something fair," said one protester, José Tomás López, a cook.

He said he took to the streets "because I've seen how my mother lives, with a salary of not more than ($700 a month) to maintain my three siblings, and I know her debts and all her efforts to meet them."

Riot police used tear gas and water cannons Tuesday to break up marches by rock-throwing demonstrators in several parts of Santiago, while soldiers and police guarded other Chileans who formed long lines at supermarkets.

"I've walked several kilometers searching for milk, but the supermarkets remain closed and neighborhood stores have run out," said Carmen Fuentealba, a retiree.

Many stores, subway stations and banks were burned, damaged or looted during protests over the weekend, and some people have reported problems getting cash at ATMs.

"It's enough with this," said store owner Fernando García. "They want to destroy it all. I don't sleep at night because I fear that they'll loot."

Shortly before the rioting broke out last week, conservative President Sebastián Piñera boasted in an interview with The Financial Times that Chile "looks like an oasis" in the region because it has a stable democracy and a balanced and growing economy that has been creating jobs and improving pay.

But the wealth is unevenly spread, with one of the region's highest rates of inequality. Many Chilean families earn $550 to $700 a month and pensions can be as low as $159.

"It's indispensable that they lower the price of medications because there's no salary that can hold up to this," said Hernán Pavéz, a retired teacher.

Long lines of cars also continued to snake from gas stations as drivers worried about supplies in a country that imports nearly all its gasoline.

"People are desperate," said gas station attendant Jacqueline Zúñiga. "They think the gasoline, the petroleum is going to end, and they keep filling and filling their tanks. ... This has all led to aggressiveness."

The disorder has prevented many people from getting to their jobs, and about 2 million young people are unable to get to classes.

Marta Lagos, director of the polling firm Latinobarometro, said problems have accumulated over at least the last four governments, which were of both the left and right.

Officials can argue "that we have reduced poverty, that there's no inflation these days, that the economy is controlled, etcetera, etcetera," Lagos said. "And all those arguments mean nothing to the people who can't make it to the end of the month."

After the protests erupted, Piñera rolled back the subway hike while also declaring a state of emergency. He said this week that Chile is "at war with a powerful, relentless enemy that respects nothing or anyone and is willing to use violence and crime without any limits."

But he did not identify the enemy, and the remark brought rebukes from celebrities, politicians and soccer players.

Piñera, a billionaire and former airline owner, then switched to a more conciliatory tone. He said the government is working on a reconstruction plan to cover the hundreds of millions of dollars in damaged infrastructure.

The president met with members of his administration and the opposition Tuesday to explore a "social agreement" on solving "the problems that affect Chileans."

But some leftist parties boycotted the meeting to protest the use of nearly 10,000 soldiers to patrol the streets. Their presence for many Chileans brings back haunting memories of Gen. Augusto Pinochet's 1973-1990 dictatorship, during which at least 3,095 people were killed and tens of thousands more were tortured in a repression of leftists, according to government figures.

Many demonstrators in the current unrest were born after the dictatorship and have defied the military curfew. While there has been serious violence, which the government blames mostly on hooded anarchists seeking to destabilize Chile, most marches have been peaceful, with people banging on pots, a common form of protest in the region.

"I think it's a critical moment in Chile in history," said Joe Eldrige, an analyst at the Washington Office on Latin America. "Are we going to go back to the old kind of right-left extremes ... or are these institutions sufficiently flexible and adaptable to address the current situation?"