Stern actions to be taken against conspirators: Hasan 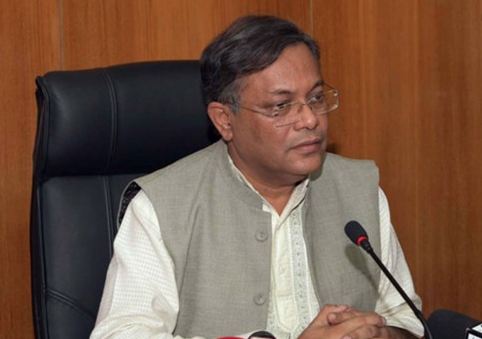 Repeating the government tougher stance against the conspirators, Information Minister Dr Hasan Mahmud warned that the government would take tougher actions if anyone try to create instability in the country.

“The people of Bangladesh are pious and peace lover, not fundamentalists,” he said, while addressing a view-exchange meeting with the leaders of All European unit of Awami League at the AL president political office in city’s Dhanmondi.

The minister said a vested quarter is hatching conspiracy to foil the peace and communal harmony in the country using social media over Bhola incident. They orchestrated the Bhola incident to create unstable situation across the country through religious sentiments by hacking others facebook ID, said Hasan, also publicity and publication secretary of Awami League.

“The government will take strict actions after identifying the perpetrators, the minister said.

Hasan urged the leaders of All European of AL to conduct a drive to free the party from infiltrators abroad similar to the country following the directives of Awami League President and Prime Minister Sheikh Hasina.

Thanking the leaders and activists of the organisation, the minister said, “It is not so easy to do politics abroad. I was also in Europe. The activists, who own the party, are doing politics even after their hard works in foreign countries.”

Mentioning that Bangladesh, which is run under the leadership of Prime Minister Sheikh Hasina, is a role model of development before the world, he said, “Bangladesh is on the highway of development . . . thus, we are making infrastructural development across the country. But we also want a developed nation where patriotism and moral values will persist,” he added.

About BNP’s criticism, Hasan said it has become their habit to criticise every work and activity of the government. Though they are enjoying the benefit of development, they are not accepting it (development), he added.

AL International Affairs Secretary Shammi Ahmed and All European of AL General Secretary Mojibur Rahman, among others, addressed the meeting with its president M Nazrul Islam in the chair.