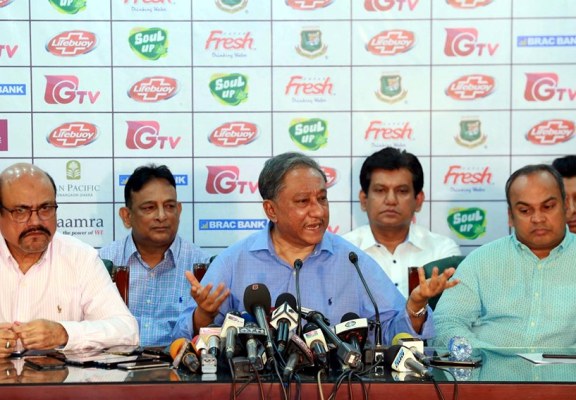 The Bangladesh Cricket Board (BCB) president Nazmul Hasan Papon on Tuesday blasted the cricketers for their unprecedented strike and said conspirators were behind the situation, but despite that the India tour would go on.

He accused an unidentified third party for the strike in a bid to tarnish the image of the country as it made headlines across the world and international cricketing authorities were telephoning him to find out what was the strike all about.

“Although we know who are the conspirators and we will find them for taking action … it is nothing but to destroy our cricket and it is extremely shocking and I cannot believe our cricketers have done this,” he told a crowded press conference.

‘‘The basic objective of this strike is to spoil the camp and India tour, some outsiders are working on this … there could be some insider, we will find out, but we should ask what can be achieved by this action,’ he said, adding that BCB salvaged Bangladesh from being ousted from Test matches.

Nazmul said without elaborating that  “the India tour will go on despite the players’ boycott.”

Sakib, who was flanked by dozens of players including national stalwarts Tamim Iqbal, Mushfiqur Rahim, Mahmudullah among others as the strike went into effect soon after the announcement.

The demands were mostly financial and their sudden boycott put lot of things at stake, including the national team’s preparation and tour of India, which was now uncertain.

Bangladesh is scheduled to start their preparation for India tour on October 25 while the fitness camp was expected to start from tomorrow, although it was unlikely as until late Tuesday there were no signs of calling off the strike.

‘’I don’t believe they are doing it for money. There may be some other reasons, a part of a plan, a conspiracy to destabilize cricket,’ Nazmul told reporters in Mirpur after an emergency meeting of the BCB convened to discuss the strike by the players.

‘’But we will find out the conspirators soon…. just give us some time,’’ he said.

The BCB president, who looked upset by the sudden action, accused one unidentified quarter for using the players to derail the crucial India tour as they wanted to destroy the image of country’s cricket.

‘’Why they are not asking me when they know they would get what they want. Everything has a reason, not all players are doing it consciously, maybe one or two players are aware about it,’ he said.

The BCB president insisted they have already accepted most of the demands of the players and if anything was left they were willing to talk.

‘We are open for talks. But they [ the players} even do not respond to our telephone calls,’ he said.

Members of Bangladesh national cricket team and senior players on Monday announced the boycott, putting next month's tour of India in jeopardy.

Flanked by dozens of players, including stalwarts such as Tamim Iqbal, Mushfiqur Rahim, Mahmudullah, among others, national Test and Twenty20 skipper Sakib al Hasan made the announcement.

The demands include respect from the Bangladesh Cricket Board members, restoration of the previous pay structure in Dhaka Premier League, a promise for returning to franchise-based Bangladesh Premier League from the next season, at least Tk 1 lakh match fees for the National Cricket League, at least 30 players in national payroll and 50 per cent rise in the salary of first-class players.