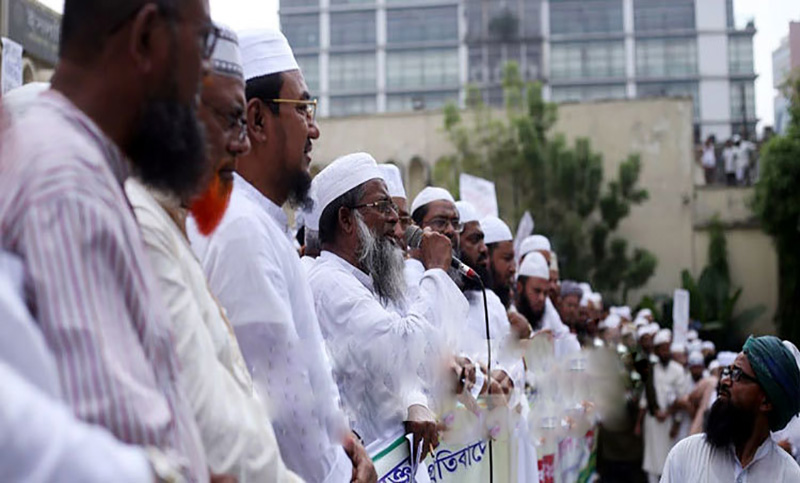 Thousands of supporters of Hefazat-e-Islam gathered at the South Gate of the mosque after Zuhr prayers demanding punishment of the police personnel “responsible for the death of four people” during the clash in Bhola.

Traffic movement from Dainik Bangla to Paltan intersection remains suspended for a hour due to the gathering.

They also demanded compensation for the victims’ families; free treatment for all the injured; punishment of police personnel responsible for the firing on the agitating people; and unconditional release of those arrested in connection with the clash and immediate withdrawal of the case.

Paltan police station Officer-in-Charge Abu Bakar Siddique said: “We have deployed adequate number of policemen to avoid any untoward situation in the area.”

On Monday, Hefazat-e-Islam announced a nationwide protest for today to press home their demands.

Besides, on Monday, Bhola administration has imposed a ban on any kind of meeting and rally in the wake of Sunday’s incident.

Meanwhile, Religious group Sharbadaliya Muslim Oikya Parishad, who are protesting Sunday’s clash in Bhola, called off their Tuesday’s demonstration as security was beefed up in the town following a ban on rallies and meeting by local administration.

Sharbadaliya Muslim Oikya Parishad had sought permission for holding a rally in Bhola on Monday as well but were denied. Later, they placed a six-point demand at a press conference in Bhola Press Club.

Earlier on Sunday, at least four people have died and over 100 others are injured in clashes between police and locals in Bhola's Borhanuddin over a Facebook post that allegedly hurts religious sentiments.