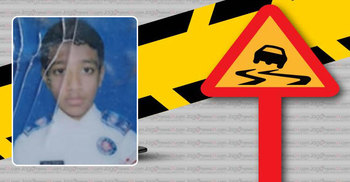 A schoolboy was killed when a truck hit a motorcycle at Shantalagate area on Jashore-Jhenaidah highway of Sadar upazila in Jashore on Tuesday morning.

The deceased was identified as Maidul Islam, 13, was a student of class seven in Jashore Daud Public School, son of Mahbubur Rahman, hailing from Tapasidanga area in Pirojpur district.

Mahbub, father of victim, said that the speedy truck hit the motorcycle from behind while Maidul was going to school on the vehicle, leaving him injured.

Dr Ahammed, a physician of emergency department in the hospital, said that Maidul died before was brought to the hospital.

Confirming the news, officer-in-charge (OC) of Jashore Kotwali Police Station, said that police seized the killer truck after the accident and a process is underway to file a case in this connection.