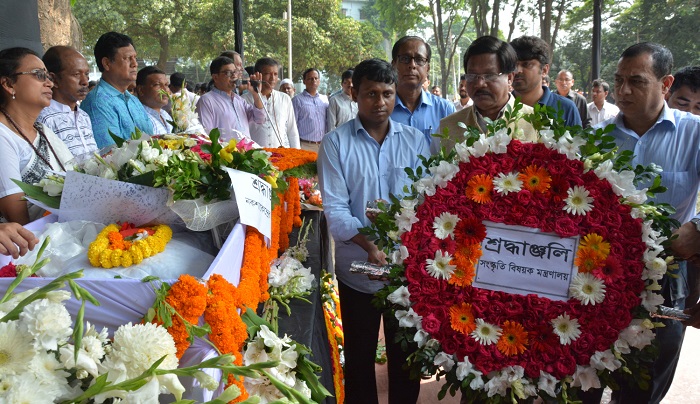 Internationally acclaimed artist, painter and printmaker Kalidas Karmakar, who passed away on Friday, was cremated in the capital on Monday following the last respects paid by people from all walks of life.

Earlier, people from all walks of life paid tributes to the Ekushey Padak-winning artist, painter and printmaker at Dhaka University and Central Shaheed Minar.

Earlier, his mortal remains were taken to the Dhakeshwari National Temple from Birdem Hospital’s mortuary around 9:00 am.

From there, the body was taken to the Faculty of Fine Art of Dhaka University where thousands of people, including artists, paid their last tributes to the renowned artist.

Kalidas suffered a cardiac arrest at his Eskaton residence around 1:30 pm on Friday and was immediately taken to LabAid Specialised Hospital where doctors pronounced him dead around 2:00 pm.

The body had been kept at the Birdem Hospital’s mortuary as his two daughters—Kanka Karmakar and Keya Karmakar—had been in the USA. They returned home on Sunday.

Kalidas Karmakar was an adviser, friend and fatherly figure of Gallery Cosmos and Cosmos-Atelier 71.