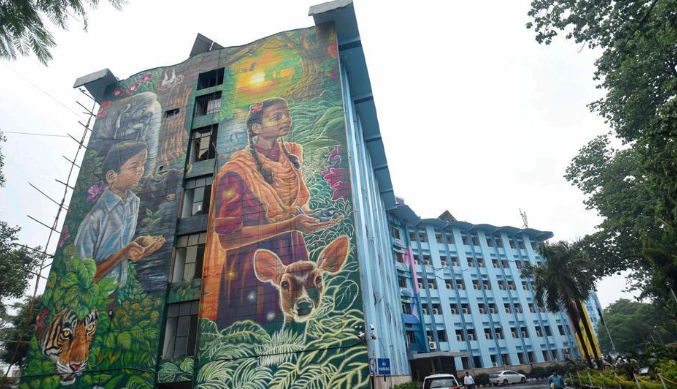 Commuters passing by the Vidyut Bhawan on Patna’s famous Bailey Road are now stopping to admire it as a team of Indian and foreign artists have transformed its dull facade into a vibrant thematic artwork with a subtle message on preserving nature.

Over the last three weeks, five artists, including two from Argentina, laboured on four separate wall arts spanning the facade of the high-rise building that houses offices of the power department of the Bihar government.

The most prominent among them is a 70 ft-high mural themed on preservation of environment and biodiversity painted by Argentine duo Emmanuel Alaniz and Federica, roughly titled ‘We are all light’.

The giant artwork on the side wall of the Bhawan is the first thing any visitor or passer-by notices, which stands out in its colourful glory.

The wall divided by windows shaft in the middle, on the right depicts a girl in salwar kameez, sporting plaited hair and holding a bird in her hand, in the backdrop of a tree, running stream and a bright sun, while a deer stands next to her.

The left portion portrays a boy holding a plant in his hand surrounded by lush vegetation, vibrant flowers and wildlife, including a monkey that hangs upside down from a tree branch, as depicted on the top of the wall.

“Can art make people think? Can it hold their attention? We feel, it can, and that is why these messages have been embedded into our work. The work portrays the desire to co-exist with nature, and the boy represents the flora while the girl represents fauna. So, we humans must respect flora and fauna,” Emmanuel told PTI.

His partner Federica who jointly executed the work, said, she and Emmanuel first took a little tour of Patna to understand the people and culture of the city and the wall art reflects those aspects.

“The two characters are inspired from real life, and we met a boy and a girl who are hearing-impaired, and these two characters in our painting represent them,” he said.

The project is being executed by Mumbai-based art group St+Art, whose projects have literally transformed Lodhi Colony in Delhi into a ‘Lodhi Art District’.

“Senior officials of the power department of Bihar government contacted us and they wanted a similar project done at Vidyut Bhawan. The project includes four separate wall arts, including the one on its main facade, and below which an art installation should be put up soon,” Project Manager at St+Art, Ritesh Sharma said, adding the plastic paint has been provided by Asian Paints.

The other two arts are depicted on the side walls, on the other side of the blue-hued building, and one portrays a woman switching on a light while the other shows an old man reaching out to protect a flame kept in a recess, the glow of light in both cases depicted exquisitely.

Artist Johnson Singh, who hails from the Northeast said, he researched on clothing style of Bihar, both for men and women, before conceptualising the two art works, which has been executed by Rajkot-based artist Munir Bukhari.

Singh also conceptualised and painted the mural on the centre of the Bhawan’s facade which has plenty of floral elements, and spans about 60 ft x 6 ft.

Sharma said, the secretary of the power department really appreciated the Lodhi Art District and plans to replicate something similar in Bihar State Electricity Board (BSEB) Colony in Patna.

“We saw the Madhubani painting done on the walls here when we arrived in Patna. Around the same time there was incessant rain that eventually led to flooding in most parts of the city. We were affected too and had to be shifted to a hotel after the guest house got flooded,” he said.

The idea was to give Patna a thematic artwork of a scale that has not been done before, and transform ordinary buildings into vibrant culture-driven landmarks while sending out a message on environmental preservation, energy saving and green energy, he said.

Emmanuel feels that public art is more powerful than those kept in galleries for a select audience.

“Art has power and in this case we have turned a building associated with power or electricity into an artwork. People are curiously stopping by, as they were when we were painting it. And, I always believe in the ‘butterfly effect’. If our art can inspire one child and instil love for nature in him, and maybe when he or she grows up to become a prime minister or CEO or actor or engineer, that person will be kind to nature.

“In our greed, we are today destroying jungles and creating concrete jungle, drying up lakes to make buildings. And, we think, wider streets and factories are only metrics of development. But, it is not. We need to strike a right balance, otherwise, more cities will see what Patna saw recently,” he said.

Inside the cafe, old oil drums and unused power equipment have innovatively been used as chairs and tables. A rear portion of an old Ambassador car is used as a sofa.