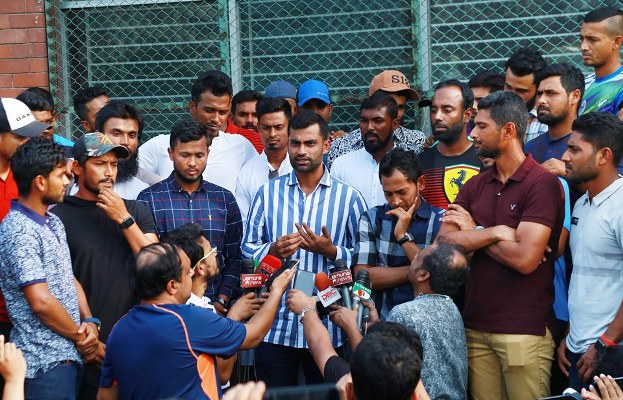 Bangladesh national team cricketers on Monday announced that they will abstain from all cricket-related activities until their 11-point demand, including salary hike, are met by the Bangladesh Cricket Board (BCB).

The cricketers made the announcement at a press conference at the National Cricket Academy Ground in the city.

Bangladesh Test and T20 captain Shakib Al Hasan placed the demands of the cricketers at the press conference.

--The players deserve more respect. Cricketers Welfare Association of Bangladesh (CWAB) president and secretary has to step down. The players will choose who will become CWAB president, chairman etc through election.

--The Dhaka Premier League has to go back to previous ways of how players used to deal with club officials and how the players used to hold power over which team they could play for and what their salary will be.

--The Bangladesh Premier League (BPL) has to go back to the system of the previous year. The disparity between salary of local players and international players must end and there should be a more balanced salary structure. The players must be able to decide in which grade they are.

--The match fee of the first-class cricketers should be 1 lakh Taka. Our salaries must be increased by 50 percent.

--Facilities like gym, indoor and ground must improve. Coach, physios and trainers must be appointed throughout the 12 months of the year. Even if the facilities cannot be ensured immediately, we want it to be ensured before next season begins. Every division has to have practice facilities so that players do not have to travel to Dhaka. The quality of balls used in first-class cricket must improve. The daily allowance of 1500 Taka, allocated for players by the BCB is not adequate and the amount must be considered so that the players can meet the demands of fitness level that was required by the BCB. The plane fares of the players must be ensured by the BCB when the players travel for games. No allowance is needed for the players but the hotels they reside in must contain gym and swimming pool since the players go through a rough time after each day of a four-day game. The bus service afforded to the players when they go to the ground must be improved.

--The number of players who are handed national team central contracts must increase.

--Salary of groundsmen must increase. The local coaches here get very little in terms of salary and a foreign coach’s salary sometimes equates to the salary of 20 local coaches. The umpires need more financial security if we want them to carry on the task as professionals and it is the same for physios and trainers. It’s time we give priority to Bangladeshis.

--We play two domestic leagues with four-day matches, namely the BCL and NCL. Premier League is the only one-day format. There must be another one-day format introduced. There should also be another T20 tournament before the BPL.

--There must be a fixed calendar before the start of the domestic league.

--The owed salaries of the Dhaka Premier League (DPL), must be paid on time.

--The rule that a player cannot play more than two franchise-based tournaments in a year must be overturned.