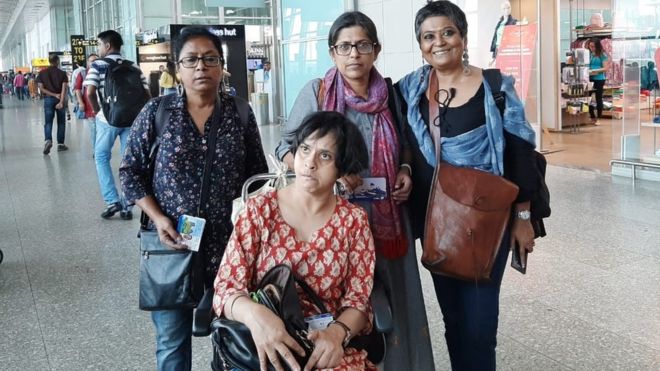 Authorities at India's Kolkata airport have apologised to two disability activists, one of whom says she was asked to remove her trousers.

Polio survivor Kuhu Das was told to remove her callipers even when she told a female security officer she could not do so without taking off her trousers.

Jeeja Ghosh, the second activist who has cerebral palsy, was told she could not fly without an escort.

They were flying to Delhi for a meeting on the rights of disabled women.

After protests, they were allowed to travel, but the activists said they felt "insulted and humiliated".

Ms Das, who had polio when she was three years old, told the BBC she had been wearing callipers with titanium rods for many years.

On Sunday afternoon when she went to the airport, the female police officer asked her to take off her callipers so that they could be put through the scanner.

"When I refused, she called another officer and right in front of me, she told her colleague that she had never seen anyone like me before. It was like I had come from another planet. How insensitive is that?"

Ms Das said she never faced such a problem at airports outside India.

She said the staff of GoAir, the private airline they had flown, told her wheelchair-bound colleague Jeeja Ghosh that she could not travel unless she had an escort.

"Jeeja is an adult" who travels around the globe on her own and feels "very insulted" by the airline, Ms Das said.

"We protested, we said this was discriminatory, so the person at the check-in counter apologised. But we are not angry with her. It's not an individual problem. It's how an airline treats a person with disability," she added.

After news of their ordeal was covered by Indian press, Kolkata airport authorities on Monday tweeted an apology to the two activists.

Two years ago, authorities said passengers with disability would no longer have to remove their prosthetic limbs for screening at airports, but two years later, it seems the order is yet to reach the police officials on security duty.

India has more than 26 million people living with physical or learning disabilities, but there is little infrastructure to support them in their everyday life.

Two years back, a female para-athlete was forced to sleep on the floor of a train as she had been allotted an upper berth against the rules.

In 2016, a disability activist, who uses a wheelchair, was assaulted in India for not standing up to the national anthem being played in a cinema.