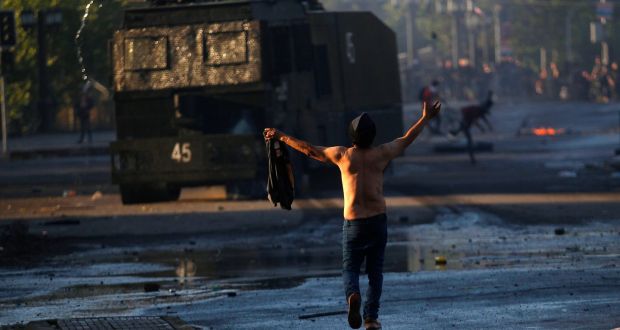 Protests and violence in Chile spilled over into a new day and raged into Sunday night despite the president cancelling a subway fare rise that has prompted violent demonstrations.

Officials in the Santiago region said three people died in fires at two looted supermarkets early on Sunday — among 60 Walmart-owned outlets that have been vandalised, and the company said many stores did not open during the day.

Five more people later were found dead in the basement of a burned warehouse and were not employees, authorities said.

At least two airlines cancelled or rescheduled flights into the capital, affecting more than 1,400 passengers on Sunday and Monday.

President Sebastian Pinera, facing the worst crisis of his second term as head of the South American country, announced on Saturday night that he was cancelling a subway fare rise imposed two weeks ago.

The fare increase touched off major protests that included rioting that caused millions of dollars in damage to burned buses and vandalised subway stops, office buildings and stores.

After meeting with the heads of the legislature and judicial system, Mr Pinera said they discussed solutions to the current crisis and that he aims “to reduce excessive inequalities, inequities, abuses, that persist in our society”.

Jaime Quintana, president of the senate, said that “the political world must take responsibility for how we have come to this situation”.

Authorities said 10,500 soldiers and police officers were patrolling the streets in Santiago as state of emergency and curfew remained in effect for six Chilean cities, but protests continued during the day.