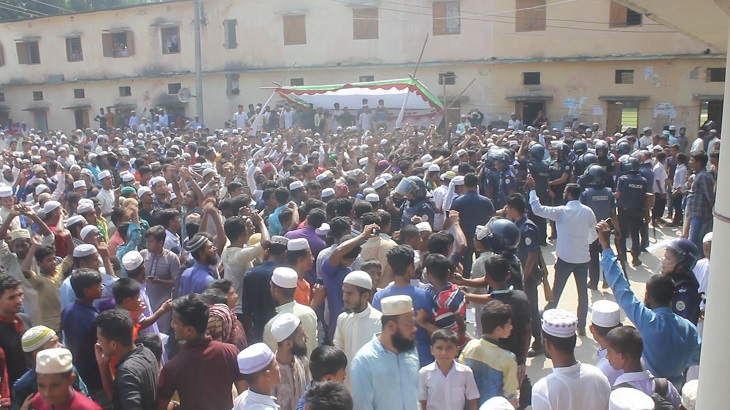 Four people were killed in the clash on Sunday. File photo

Protesters on Monday sought removal of the district’s police chief and officer-in-charge of Borhanuddin Police Station within 72 hours over Sunday’s clashes that left four people dead.

They demanded maximum penalty for ‘Biplob Chandra Shuvo’. It was from his Facebook ID that derogatory messages about Allah and Prophet Muhammad were sent to some people. Locals burst into protest after screenshots of the messages went viral on Facebook.

The man insisted that his account was hacked. Police have already detained two suspected hackers.

Four people were killed and at least 200 others were injured in a clash on Sunday in Borhanuddin.

The All Party Muslim Unity Council urged the government to enact a law with capital punishment for derogatory remarks about Allah and Prophet Muhammad.

They also sought compensation for the families of the deceased and bearing medical expenses of the injured. The council also called for releasing everyone arrested over Sunday’s clashes.

In the morning, the local administration imposed an indefinite ban on public gathering in the district. Deputy Commissioner Mohammad Masud Alam Siddique said the step was aimed at maintaining law and order.