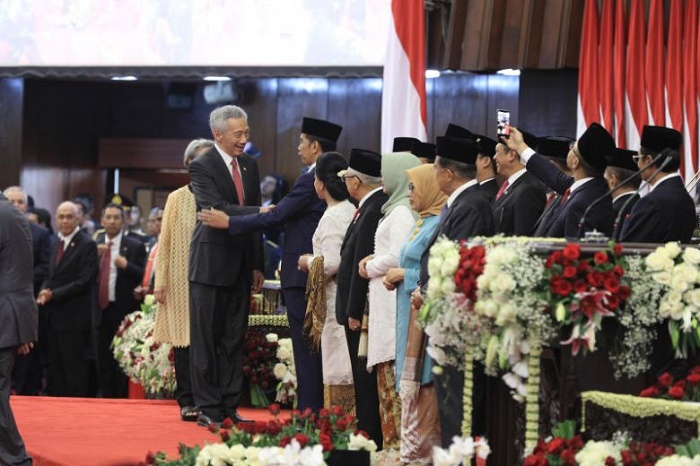 Leaders from 17 countries gathered in Indonesia's capital city on Sunday (Oct 20) to witness the inauguration of  Joko Widodo for his second and final term as President of Indonesia.

Dignitaries from other Asean countries were also present, as were representatives from further afield.

The leaders began arriving at Jakarta's Parliament building on Sunday afternoon in sleek black Mercedes-Benz cars, with the swearing-in ceremony starting at around 3.30pm.

During the ceremony, President Jokowi and Vice-President Ma'ruf Amin recited the oath of office with copies of the Quran held over their heads, before lawmakers and regional senators that make up the People's Consultative Assembly, or MPR.

Both men then signed the minutes of the president's inauguration, before President Joko spoke on the challenges for Indonesians in the future.

Following the formal proceedings, the visiting dignitaries went up on stage to offer the newly sworn-in leaders their well-wishes.

President Joko, better known as Jokowi, and Vice-President Ma'ruf Amin had won the April presidential election on a joint ticket with 55.5 per cent of the vote.

In a Facebook post on Sunday, PM Lee congratulated the newly sworn-in leaders and expressed his hope that bilateral ties will continue to flourish.

"As close neighbours with longstanding ties, and as founding members of Asean, our two countries have been through much together," he said.

"Over the years, we have deepened our engagement and today we collaborate across the board in trade and investment, digital economy, defence and security, education, cultural and people-to-people links."

"I wish Bapak President and his new administration all the best in ushering progress for Indonesia, and even stronger relations between Singapore and Indonesia," he wrote.

Lee was among several leaders who called on President Joko at the Istana Merdeka on Sunday morning, before the formal swearing-in ceremony.

In a statement, Singapore's Ministry of Foreign Affairs said PM Lee congratulated Joko on his inauguration, and said he looked forward to building on the existing excellent cooperation between the two countries.

The leaders also agreed to continue expanding collaboration across many sectors, including in human resource development and the digital economy.