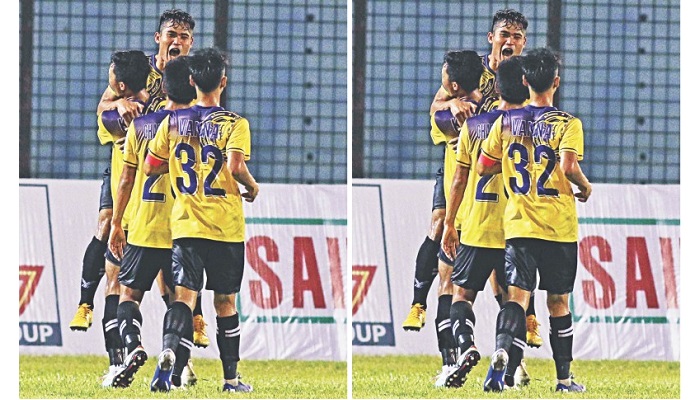 Forward Somxay Keohanam scored a brace as Young Elephants FC, came from behind, to notch a 2-1 goals win over Mohun Bagan Athletic Club of India in their group A opening match of Sheikh Kamal International Club Cup Football Tournament held on Sunday at MA Aziz Stadium in Chattogram.

In the day’s proceeding, both the teams launched attacks at the beginning of the match which entertained the crowds in the big bowl.

However Mohun Bagan got the fruit early as their Spanish recruit Julen Colinas opened an account giving Mohun Bagan a deserving lead in the 18th minute.

Young Elephants, however, staged a fightback in the match as forward Somxay Keohanam restored the parity for the Laos side scoring his first goal in the 44th minute.

After the lemon break, Young Elephants played more organised football creating pressure on their opponents and they maintained it till the final whistle.

At one stage it seemed the match was going to a tame draw but Somxay Keohanam scored the winning goal for his side one minute before the final whistle ensuring his side’s deserving victory.

The Kolkata based outfit Mohun Bagan, however, got several scoring chances in the second half but they were denied by the Young Elephants’s packed defence.

Young Elephants played good football all through the proceeding and notched their victory while Mohun Bagan failed to utilise their scoring chances, especially in the second half.

Meanwhile, as per the revised fixture of group B matches, Chennai City FC of India will play against Terengganu Football Club of Malaysia while Bashundhara Kings will lock horn against Sree Gokulam Kerela Football Club of India in their opening group matches scheduled to be held on Tuesday (October 22) at the same venue.