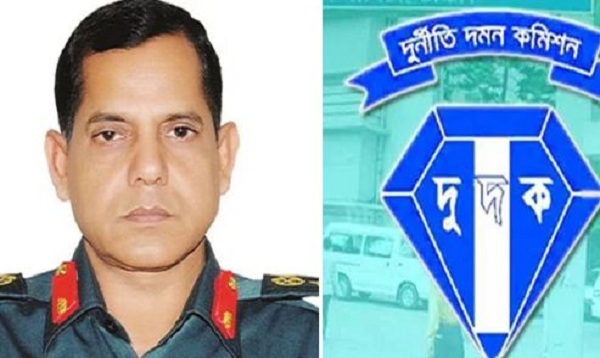 The Anti-Corruption Commission (ACC) on Sunday arrested Deputy Inspector General (DIG) of prisons Bazlur Rashid in connection with a case filed on charges of amassing illegal wealth worth Tk 3.8 crore.

A team of ACC led by its Director Md Yusuf arrested the DIG prisons soon after interrogated him at the ACC headquarters over transaction of bribe.

Meanwhile, acting Judge Al Mamun Bhuiyan of Dhaka Metropolitan Sessions Judge Court sent DIG Bazlur Rashid to jail after ACC deputy director Md Nasir Uddin produced him before the court and pleaded to keep him behind bars until the disposal of probe of the case.

Defence lawyer, however, pleaded for his bail. After hearing both the sides, the court sent him to jail and rejected the bail petition.

Earlier in the morning DIG Prisons Md Bazlur Rashid and his wife Razzakun Nahar appeared before the anti-graft body to face grilling about their illegal wealth.

During the interrogation from 10:00am to 3:00pm at the commission’s Segunbagicha headquarters, the DIG couldn’t give logical answer about his illegal wealth.

Earlier in the day, ACC Deputy Director Salauddin filed a case with its integrated District office Dhaka-1 under section 2 (1) of the Anti-corruption commission act.

According to the case, Bazlur Rashid purchased an apartment of 2,981 square feet from a project of Rupayan Housing on Siddheswari Road in the capital and he paid Tk 3.8 crore for the apartment. But he could not show any legal sources of income of the money.

He also did not give any information regarding purchasing the apartment at his income tax file. So, the money is earned beyond known sources of income, it said

It also stated that DIG Bazlur signed an agreement with Rupayan Housing on April 24, 2018 to buy the apartment and he paid Tk 54,000 through United Commercial Bank on June 7 and rest of Tk 3.7crore paid in cash to the housing company.