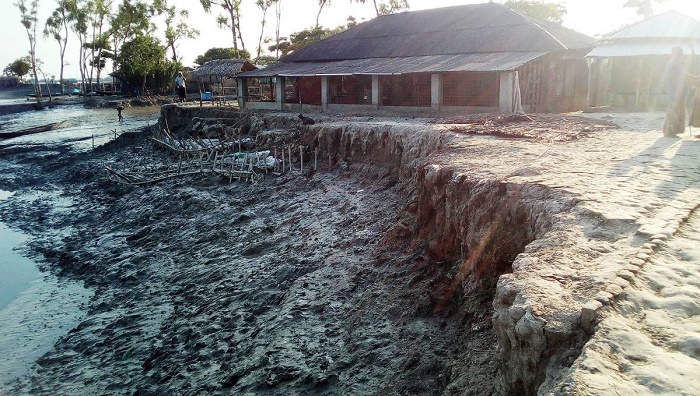 An entire market and several homesteads were devoured by the Sutarkhali River of Dacope upazila in Khulna over the last one month.

All the permanent structures of Kalabagi Brihaspati Bazar along with homesteads of three families went into the river gorge due to serious river erosion.

Following the serious erosion, locals urged the authorities to take effective measures to check it.

Victims said the Sutarkhali ate away the whole market and nearby Zohra Khatun Madrasa and Russel Smriti Sangsad. Besides, Tagore Das, Guru Das Mondol and Ayna Begum lost their homesteads along with their belongings to the river.

Although public representatives and officials of the upazila administration visited the area, no step has so far been taken to check the erosion.

Visiting the area, the UNB correspondent found that a stretch of one and a half km from the north side of the bazaar till Pundit Chandra Govt Primary School was also hit by the erosion.

Locals feared that entire Kalabagi village will go into the river gorge if immediate steps are not taken to check it.

Recently, MP from reserved seat Advocate Gloria Jharna and Upazila Nirbahi Officer Abdul Wadud visited the area and assured the victims of effective steps. But their assurance has not been implemented yet.

Meanwhile, the Water Development Board blamed a World Bank project for the current situation, saying they have no scope to take measure to prevent the erosion as the polder is now under the project for building an embankment.

On the other hand, engineers of the World Bank project said checking river erosion in the area is not under their design.

In this circumstance, residents of the area are facing a constant threat of losing their homesteads.

They said they do not want any relief but measures to prevent erosion so that they can survive.