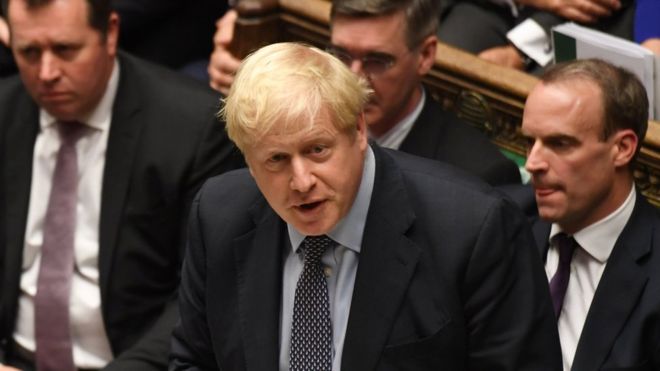 Boris Johnson has sent a request to the EU for a delay to Brexit - but without his signature.

The request was accompanied by a second letter, signed by Mr Johnson, which says he believes that a delay would be a mistake.

The PM was required by law to ask the EU for an extension to the 31 October deadline after losing a Commons vote.

EU Council President Donald Tusk tweeted that he had received the extension request.

He added he would now consult EU leaders "on how to react".

Hours after losing a crunch vote in a historic Saturday session in the House of Commons, the prime minister ordered a senior diplomat to send an unsigned photocopy of the request for a delay, which was forced on him by MPs last month.

The second letter from Mr Johnson - signed off this time - makes clear he personally believes a delay would be a mistake.

It says the government will press on with efforts to pass the revised Brexit deal agreed with EU leaders last week into law, and that he is confident of doing so by 31 October.

A cover note from Sir Tim Barrow, the UK's representative in Brussels, explained the first letter complied with the law as agreed by Parliament.

The prime minister previously said he would "rather be dead in a ditch" than ask the EU to delay Brexit.

BBC Political Editor Laura Kuenssberg described the decision to send three documents as "controversial", predicting "there will be a fight about whether Boris Johnson is trying to circumvent the court".

She added: "This is heading straight for the court, and it may very quickly end up in the Supreme Court."

Earlier, Mr Johnson rang European leaders, including Mr Tusk, to insist that the letter "is Parliament's letter, not my letter".