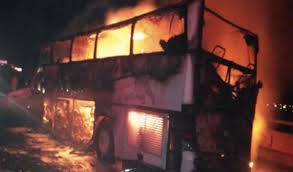 Eleven Bangladeshi nationals were confirmed death after a bus carrying pilgrims collided with another vehicle near the Muslim holy city of Medina in Saudi Arabia on Wednesday.

Shortly after the accident, the bus carrying pilgrims travelling from Medina to Mecca caught fire leaving at least 35 people dead.

A notice signed by KM Salahuddin, the first secretary of the Labor Welfare Wing of Bangladesh Consulate in Jeddah on Saturday confirmed the news.

Earlier, officials at Bangladesh embassy in Saudi Arabia said it was difficult for them to determine how many Bangladeshis were killed in the accident as the bodies were so charred that it became difficult to identify them without a DNA test.

The accident on Wednesday evening involved a collision between "a private chartered bus... with a heavy vehicle" near the western city, a spokesman for Medina police said, according to the official Saudi Press Agency.