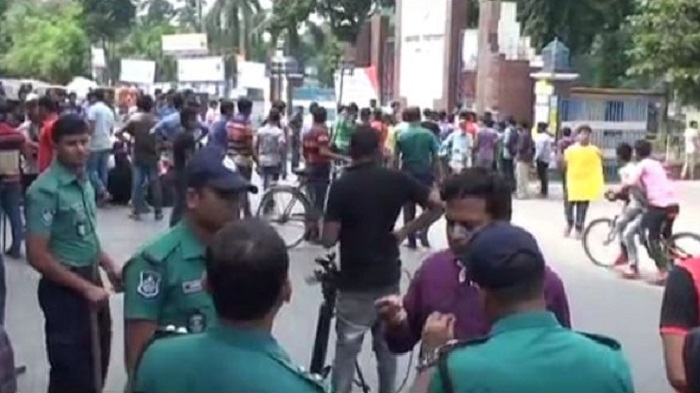 The students of Rajshahi University on Saturday blocked the Dhaka-Rajshahi highway protesting alleged physical assaults on a student of the university Friday night by a group of snatchers.

The protesting students assembled on the highway in front of their university entrance gate this noon demanding safety of their life on the campus.

The protesters said the university administration has failed to ensure a safe campus for them.

They also demanded a restriction on the entry and movement of intruders on the campus.

They also formed a human chain in front of the central library building of the university to place their demand before the blockade programme.

Earlier, on Friday night Firoz Anam, a first-year student of the Economics Department of the university, fell victim to snatching.

The victim was rushed to the Rajshahi Medical College and Hospital (RMCH) after he was allegedly stabbed by the snatchers. They stabbed Firoz failing to mug his mobile phone and money.

Students of the university also blocked the Dhaka-Rajshahi highway last night protesting attacks on their mate last night following the spread of the news of the attack.