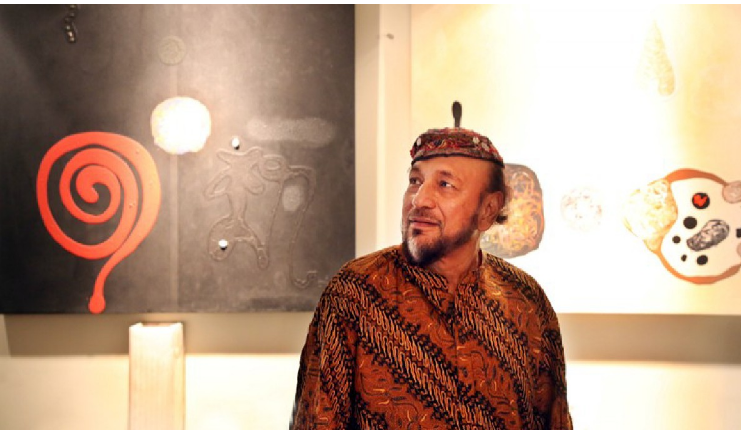 Arguably the country’s greatest contemporary artist, Kalidas Karmakar, who tragically passed away Friday following a heart attack and falling badly in the bathroom of his Eskaton flat in the capital, was a true original - an iconoclast who till the end, never stopped pushing at the boundaries of his discipline, always looking to find new forms of expression for his vision, never afraid to experiment or to go out on a limb.

It is a testament to his supreme skill as an artist, a purveyor of form and colour, that the results were often spectacular, almost always compelling. He leaves behind a body of work that is not only captivating for its sheer range and ambition, but also we must remember as we survey the individual pieces, often pioneering in the context of the society that he presented them in.

The society in question happened to be one still in a state of flux, following the birth of Bangladesh through a War of Liberation that was at once glorious and harrowing. His debut solo exhibition would be held in 1976, as he was turning 30, and his impact was instant. Raised in a family of artisans (hence the surname), art was in his blood, with several members of the family including his father known to possess a flair for drawing. Although the humble circumstances in their Faridpur home would not have allowed a proper venting.

Before he came to art, Kalidas had a strong yearning towards botany,as his family’s patriarchs were chemists who relied on herbal ingredients. He was also a class topper, but paradoxically also a troublemaker growing up, going around town with his group of ruffians, beating people up, participating for social causes and more. He missed out eighth and ninth grade, after which he intimidated his school teachers, notably his Sanskrit, Math and English teachers – to ensure that he passed with flying colours. All this earned him the nickname “Pagla”, or the madcap.

“As a family of artisans, perhaps this was in our genes. I practiced along and so decided to enroll myself at Dhaka Art College back in the 1960s. Coincidentally the day I arrived at Dhaka was the admission test day as well. I remember Hashem Khan, then a new teacher at Art College, handing me out a white piece of paper, a pen and asking me to draw a tree in an hour. I finished in 10 minutes, which had clearly impressed him. I credit all my artistic knowledge to artists Hashem Khan and Mustafa Monwar,” Kalidas said.

Eventually he shifted though, and graduated in fine arts from the Govt. College of Fine Arts and Crafts in Kolkata in 1969. Later in Warsaw, he attended what was billed as a ‘superior workshop’ (Poland was still very much on the other side of the Iron Curtain.) where he learned classical printmaking under a Polish government program, under professors Rafael Strent and Aleksander Kobzdej. On his return to Dhaka, he would conduct the country’s first printmaking workshop, attended by several renowned artists eager to learn the new technique. His first solo graphic art exhibition was also held during this period, and received rave reviews from the late, great architect Shamsul Wares, one of the most brilliant minds of our time.

Over two decades later, in furtherance of his love for printmaking, he would work closely with Gallery Cosmos and other partners to install the first printmaking machine in Bangladesh, through a separate unit within the gallery that would be converted to a printmaking studio. The plates are still hot off the press.

Just a word on that debut though, before we move on. Or rather the story behind just one of the 121 items he put on display for it, that Kalidas himself narrated for a 2017 interview with Dhaka Courier, soon after he had been awarded the Shilpakala Medal. A year later he would add the Ekushey Padak, which remains the ultimate recognition this country bestows on its artists. Accomplished

Again to return to that debut exhibition, many of the pieces I had brought along for the exhibit were what is called metal collages.  And there was one that depicted a sunflower, only through it Kalidas had placed a single, real bullet. It caused quite a stir, the starkness of the representation struck many as so deliberate that there had to be some meaning the artist intended to convey through it, rather than throw it out there for each individual to arrive at some interpretation.

No one could decipher its true meaning though, until the late poet Shamsur Rahman, then working for Dainik Bangla, who wrote an article where he deduced that it was his artistic protest about the gruesome murder of Bangabandhu Sheikh Mujibur Rahman the previous year. But his 21-day long exhibition, which was slated for a seven day extension, got cancelled as a result.

Kalida would stand out though, and in the pages of history will do so again, not merely for any technical mastery or superior skill he might have possessed (he did, in spades, and never lost it), but rather for something far more essential to his stature: he would challenge his audiences to drop their inhibitions at the door and think anew, of art and what it could be, its possibilities, its possible elements. His use of living objects, elemental symbols, totemic or tantric emblems, found objects (cowries, pebbles) were unprecedented for his time, yet now by-and-large ubiquitous. In a sign of the impact and influence his work was generating, Kalidas motifs, or at least their echoes, found their way into the fashion designs of the day. .

In the years that followed that debut, Kalidas would keep on challenging the scene, the artistic community, to keep expanding its horizons, by introducing entire genres and sub-genres from  printmaking and graphic art to installation and new/mixed media. His star meanwhile, expanded to cover a wide arc of nations, from Malaysia in the east all the way, in the west, to the US Rocky Mountains, mostly within progressive art circles. His solo exhibitions mushroomed across this swathe of the globe, and they loved him in Australia too. Kalidas had emerged like a comet in the night sky, when no-one was expecting it, there was nothing to indicate that just 5 years after the war had ended, the cool kids would have to turn right back to cover the most stupendous debut in living memory by a young artist in the entire region. It was vivid, and raw, and it felt immediate.

What it betrayed was an utterly modern sensibility that was yet anchored by the artist’s own unique persona, his formative experiences. His social conditioning. But Kalidas insisted he was alluvial, just like the soil deposited in the lands he grew up in, as the great Himalayan rivers washed into the ocean. Today, once more, he is off into the unknown. But not before securing a legacy that those who knew him will guard as their own.