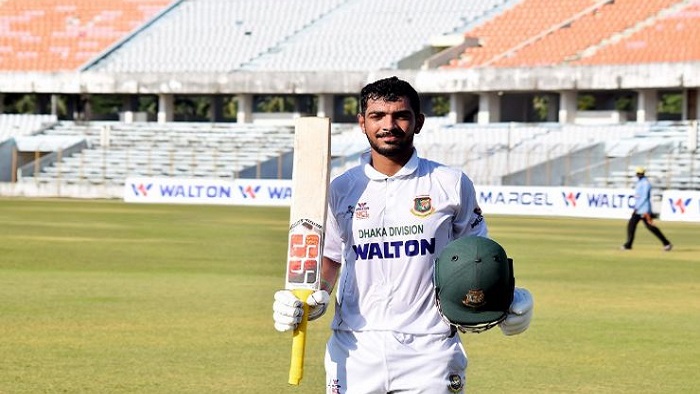 Dhaka Division vs Rangpur Division: Resuming the first innings with overnight total of 312 for four, Dhaka declared the inning for 556 for 8 in 160 overs against Rangpur Division on the second day of the four-day second round NCL match at Zahur Ahmed Chowdhury Stadium.

Saif, who left the field with injury on Thursday with 120 runs, resumed batting on the second day and scored his second double-ton in first-class cricket. He remained unbeaten at 220 off 329 balls with 19 fours and four sixes. Overnight batsmen Shuvagata Hom and Sumon Khan scored 17 and 24 runs respectively.

Dhaka Division captain Nadif Chowdhury came to bat at number eight and scored 61 off 75 with six fours and two sixes.

In reply, Rangpur scored 71 for two in 18 overs to trail by 485 runs with eight wickets in hand. Liton Das and Naeem Islam remained unbeaten on 51 and 8 runs respectively at the end of the day.

Khulna lost Soumya Sarkar (0) early but Imrul Kayes continued with good form hitting 93 runs off 190 balls with 10 fours before being dismissed by a good run-out effort by Najmul Hossain Shanto and Shakhir Hossain.

In reply, Barishal scored 104 for four in 43 overs at the end of day two. Opener Rafsan Al Mahmud scored 49 off 121 balls with five fours and one six. Mohammad Ashraful and Mosaddek Hossain scored unbeaten four each to end the day.

Dhaka Metro vs Sylhet Division: In the other Tier-2 game at Shahid Chandu Stadium in Bogura, replying to Dhaka Metro’s first innings total of 246, Sylhet scored 319 in 84.5 overs in their first innings, resuming the day with an overnight score of 5 for 1.

Dhaka Metro opened their second innings at the end of day two and played seven overs to score 9 runs without losing any wicket. Mohammad Naim and Rakin Ahmed remained unbeaten for 8 and 1.