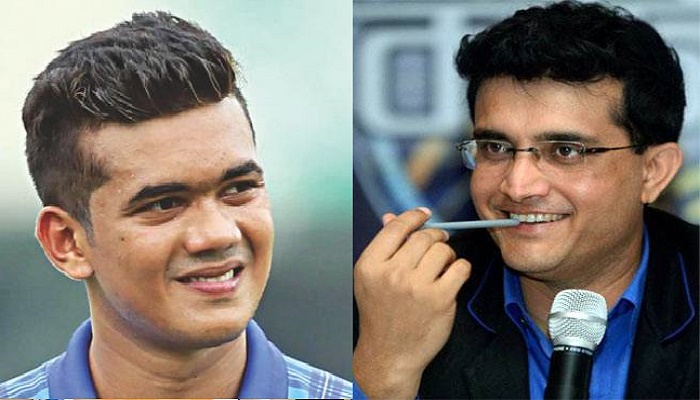 Board of Control for Cricket in India (BCCI) President-elect Sourav Ganguly has inquiries about the well being of Bangladesh right-hand fast bowler Taskin Ahmed.

Sourav, the former Indian captain, wanted to know about the health condition of Taskin, who suffered ankle injury earlier this year, during a media briefing in Kolkata on Thursday.

Taskin, the 24-year-old seamer, sustained ankle injury during the Bangladesh Premier League, and which saw him ruled out of the New Zealand tour earlier this year.

Returning to his hometown Kolkata recently, after filing his nomination for the post of BCCI president, Ganguly received a hero's welcome and also held a press conference, where he talked about Bangladesh cricket.

During the press conference, Sourav informed reporters that he has already received a congratulatory message from Bangladesh Cricket Board (BCB) president Nazmul Hassan Papon.

When asked about the forthcomming relation with BCB, the president of Cricket Association of Bengal (CAB) said: “Both the boards have a good relation and I am also ready to help Bangladesh hundred times. I think that there has opportunity to help each other. Bangladesh cricket team is coming to India to play a test series next month. We will discuss all the issues during the neighbouring country’s tour.”

While talking about Bangladesh performance in World Cup, Sourav said that Bangladesh is improving gradually. But they have to improve in bowling department as they suffered a lot in the World Cup for  inconsistent bowling.

Earlier, Sourav Ganguly invited Prime Minister Sheikh Hasina to become the witness of upcoming India vs Bangladesh cricket test match, to be held at the Eden Gardens from November 22 to 26.

The former India captain is set to take over the Board of Control for Cricket in India (BCCI) on October 23.