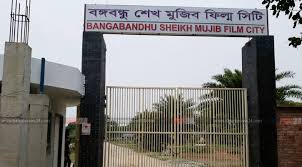 Information Minister Dr Hasan Mahmud said the Bangabandhu Film City will be turned into world-class within the
shortest possible time.

"Within the shortest possible time, this (Bangabandhu Film City) will be turned into an international standard film city gradually,” he told reporters during his visit to the film city.

The preliminary works of Bangabandhu Film City construction on a 105-acre of land is almost completed, Dr Hasan said.

He said Bangladesh and India jointly are going to make a film on Father of the Nation Bangabandhu Sheikh Mujibur Rahman, commemorating the golden jubilee of the country’s independence.

The minister said noted Indian director Shyam Benegal, the director of the Bangladesh-India co-production, has already visited Bangabandhu Film City and wished to shoot of some parts of the film.

The decision to jointly produce a feature film on Bangabandhu Sheikh Mujibur Rahman along with a documentary on Bangladesh Liberation War is the outcome of an improved bilateral and diplomatic relations between the two neighbouring countries.

This initiative can further strengthen the bond through the exchange of audio-visual programmes and making Indo-Bangla films and documentaries.

The Bangabandhu Film City will not only be used for shooting purpose, but also for serving as a recreation centre, having Grameen houses, market, shooting restaurant, makeup rooms, a lake, a pond, a date palm garden, and forests of different trees, a bridge, a dormitory and many other infrastructures.