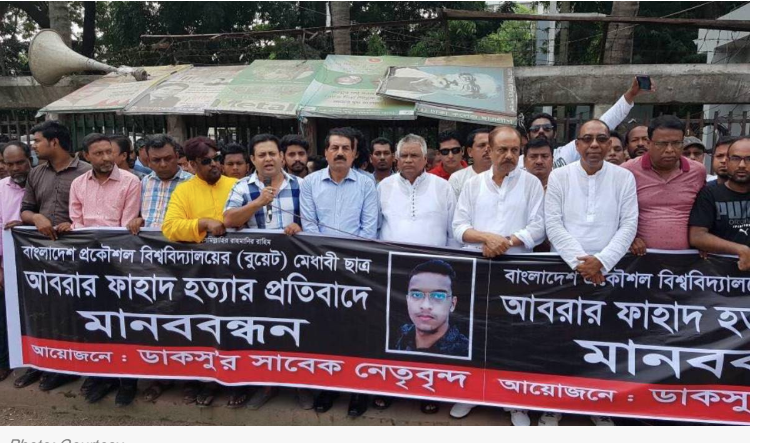 Former leaders of the Dhaka University Central Students Union (DUCSU) on Thursday voiced a strong opposition against imposing any ban on student politics, and urged the government to quit paving the path for ‘restoration’ of democracy and people’s rights.

Speaking at a human-chain programme, they also vowed to continue a united movement until the fall of the current government is ensured.

He said student politics cannot be stopped, and the students should be allowed to do politics independently and freely. “You (govt) won’t be able to ban student politics as no government could do it in the past. You rather stop them who kill people and run gambling and casinos.”

Abdur Rob, also the president of Jatiya Samajtantrik Dal (JSD-Rob), said the government’s political agenda is not to allow its opponents to raise their voice.

He said Abrar was killed for standing in favour of the country’s people and the War of Liberation by posting a status on the Facebook against the ‘selling out’ of the country’s sovereignty and independence. “It’s an illegal, killer and corrupt regime. Your musclemen not only brutally killed Abrar, but also annihilated the entire nation.”

Mentioning that Chhatra League men did not face any action for beating up those who waged the anti-quota and road safety movements, Abdur Rob feared that the killers of Abrar may not be punished finally.

Rob said a national government, comprising representatives from different professions, is now necessary to be formed to save the country from ‘misrule’ and ‘restore’ democracy.

“The blood of Abrar has united the entire nation. We must continue the united movement until the fall of the government is ensured. We must restore people’s basic, constitutional and democratic rights ousting this regime,” he said.

Nagorik Oikya Convener Mahmudur Rahman Manna said the government is resorting to a trick to ban student politics. “They want to cut off the head for headache instead of taking steps to cure the problem.”

Manna, a former Ducsu VP, said a ‘killer’ organisation like Chhatra League should be banned, not the student politics.

He said had Chhatra Dal of other student originations remained active at Buet, Abrar could not have been saved. “A hell-like situation has been created for the 11 years. Now time has come to say we don’t want the government to stay in power which kills students.”

The Nagorik Oikya convener alleged that Buet Vice Chancellor Prof Saiful Islam is responsible for the murder of Abrar and demanded his removal.

About Jatiya Oikyafront’s planned rally at Suhrawardy Udyan on Tuesday next, Manna said they will hold the programme even if they are not given permission for it. “We’re taking preparations to ensure the fall of this regime.”

Another ex-Ducsu VP, Amanullah Aman, said the government has failed to ensure the security of people and students as it was not elected with people’s votes. ”They’re making their pockets heavier with public money instead of thinking about people’ sufferings and welfare.”

He accused the government of snatching democracy and people’s freedom of expression.  “This regime is running the country as per the instruction of its masters.”