Prime Minister calls on President; apprises him of India, US tours 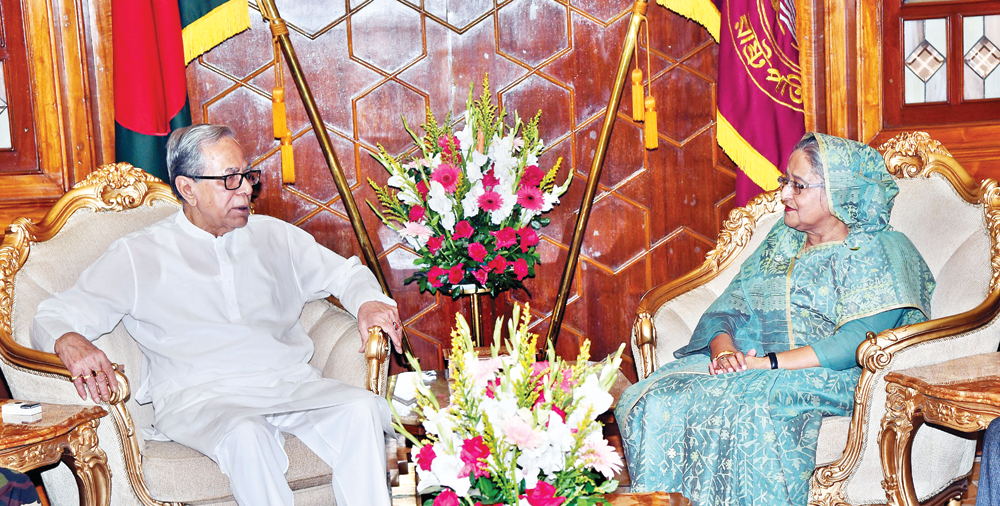 "The Prime Minister discussed different state-level issues, especially her recent visits to the USA and India, with the President,” President’s Press Secretary Md Joynal Abedin said while briefing reporters after the meeting.

The Prime Minister arrived at the Bangabhaban around 7pm. On her arrival, she was received by Abdul Hamid and his spouse Rashida Khanom with a bouquet, reports UNB.

Sheikh Hasina apprised Abdul Hamid of the outcomes of her US and India visits and handed over two reports to this end, the press secretary said.

The Prime Minister made a four-day visit to India on October 3-6 when she attended the India Economic Summit of the World Economic Forum and held bilateral talks with her Indian counterpart Narendra Modi.

Earlier, she went on an eight-day official visit to the USA on September 22-29 to attend the 74th Session of the United Nations General Assembly (UNGA).

The President congratulated the Prime Minister on receiving three prestigious awards during her tours to the two countries, the press secretary added.

The Global Alliance for Vaccination and Immunisation awarded her ‘Vaccine Hero’ award for the outstanding success of Bangladesh in immunisation. She was also honoured with ‘Champion of Skill Development for Youth’ award.

Sheikh Hasina received the 'Tagore Peace Award 2018' in New Delhi in recognition of her contribution to maintaining regional peace and prosperity. The Asiatic Society, Kolkata, conferred the award on her at a function at Taj Mahal Hotel there.

Joynal Abedin said the President and the Prime Minister enquired about each other’s health.