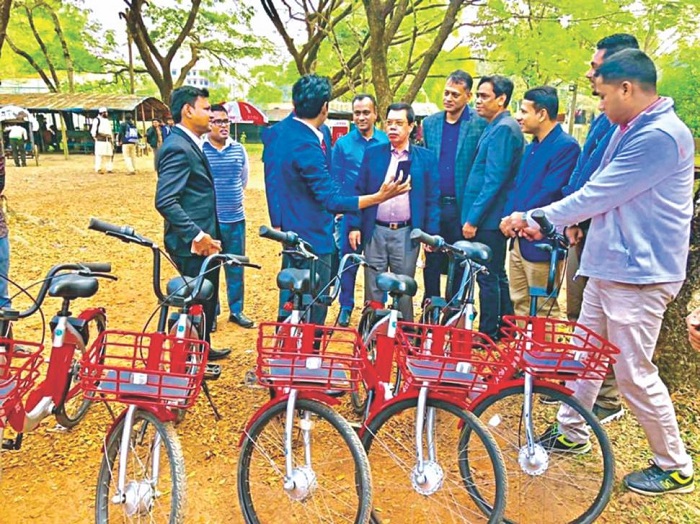 JoBike is a mobile application that enables users to find bicycles for use on a temporary basis. After downloading application, users will have to open an account and after scanning the QR code they can easily avail bicycles for use.

Dhaka University Central Students’ Union (DUCSU) took the initiative to launch the service titled “DU Chakkar” initially with 100 bikes and the number of bikes will be increased within two months as per students demand.

“It is a great initiative of DUCSU and students will be benefited from the bicycle service,” said the VC.

Welcoming the DUCSU leaders for the initiative, Deputy Minister for Education Mohibul Hassan Chowdhury Nowfel said, “Leaderships are meant to work for the welfare of students, not to enjoy a luxurious life.”

DUCSU Student Transport Secretary Shams-E-Noman said, “Introducing JoBike service for the students was included in my election manifesto. We want carbon-free campus and it can be the first step of this mission of making the campus free from carbon.”

Students will enjoy the first five minutes of a ride at Taka 2.5 while they have to pay Taka 0.40 for per minute travel.

JoBike Founder Mehedi Reza, a former product operations manager at Alibaba Group, thanked all the people concerned and said, “It was my first dream to introduce the Jobike service in Bangladesh and the second one was to introduce it at DU, now my dream came true.”

JoBike — bicycle sharing app — started its journey from the tourist hub city of Cox’s Bazar in January 2018. The service is now also available at Jahangirnagar University, Shahjalal University of Science and Technology and the Mirpur DOHS area of Dhaka.