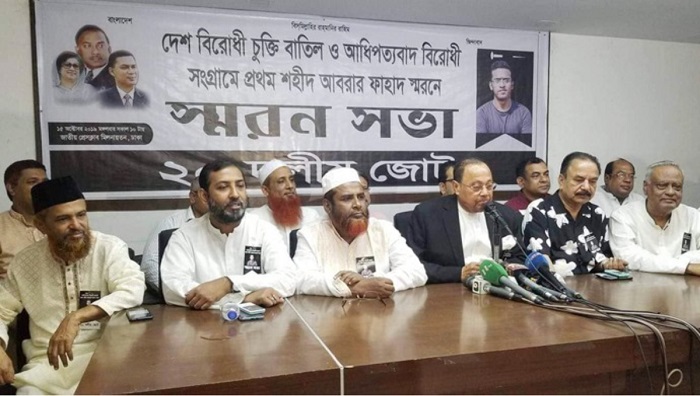 BNP senior leader Barrister Moudud Ahmed on Tuesday urged their party leaders and activists to have patience as the time is coming to oust the current ‘oppressive government’ through a mass upsurge.

The BNP leader came up with this observation while speaking at a discussion programme at the Jatiya Press Club (JPC) in memory of BUET student Abrar Fahad who was killed reportedly by some Bangladesh Chhatra League (BCL) leaders and activists last week.

“Many people think how long they’ll endure the repression. We’ve to withstand it for a few more days. I think a time will come when people will dislodge the repressive regime through a mass upsurge,” Moudud Ahmed said.

The BNP leader also said the sooner the current government quits the better for the country.

“So, we demand the government step down immediately paving the path for forming a representative administration through a fair and credible election,” he said.

About BNP chairperson Khaleda Zia’s imprisonment, he said, “I think Khaleda Zia’s release is not possible through the legal process. She won’t be freed on parole, and the only way to have her freed is a street movement. We must free her, and it’s now a matter of time.”

Moudud, a BNP standing committee member, said Khaleda’s release is now essential to ‘restore’ the rule of law, the independence of the judiciary, press freedom and create an atmosphere in the country so that people can live in a civilised way.

He said the 20-party alliance will remain intact, but a greater platform involving patriotic and democracy-loving people must be formed to wage a successful movement and tackle the current situation.

The BNP leader said an anarchic situation has been prevailing everywhere while widespread corruption is going on as the current government has no accountability.

He said people have got fed up with the ‘evil’ activities of Chhatra League and Jubo League.

Moudud said BUET student Abrar’s murder has exposed that the government does not even hesitate to kill the dissidents. “This is a fascist attitude.”

He said people now know the ruling party-backed Chhatra League has created torture cells not only at BUET but also at all the halls and dormitories of other universities, including Dhaka University. “They not only repress and beat the dissidents but also the common students.”

BNP standing committee member Gayeshwar Chandra Roy said there are some ‘collaborators of the government’ in their party who are trying to free Khaleda on parole.

He said there is no reason for the BNP chief to be freed on parole or through a compromise with the government.