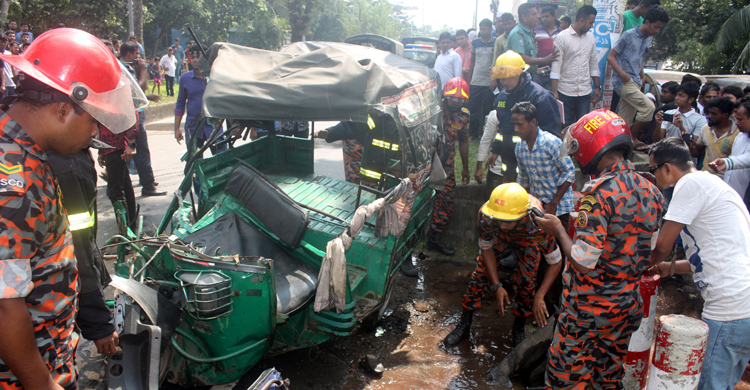 At least two people were killed and six others injured in a head-on collision between a BRTC bus of Barisal University and a human hauler (locally known as tempo) at Baidhapara area on Barishal-Dhaka Highway in Barishal on Tuesday morning.

The deceased were identified as Abdul Khaleq, 60, hailing from Kathalia area in Jhalakhati and Nipa Mistri, 30, wife of Rajib Mistri, hailed from Dewlakathi area of the upazila.

The injured were identified as Shakil Ahmed, 18, Fayshal, 25, Hridoy, 25, Elias, 26, Rajib, 42, and an unidentified man. Now they are undergoing treatment at Sher-e-Bangla Medical Colllege and Hospital (SBMCH).

"A Barisal University-bound student bus of BRTC collided with the human hauler coming from opposite direction at around 11:00am at the area, leaving eight passengers of the human hauler injured," said sub-inspector (SI) of Barishal Kotwali Police Station Shahjalal.

Police seized the killer bus but driver of the vehicle fled the scene after accident, the SI said.

Later, locals took the injured to SBMCH where duty doctors declared Khaleq dead on arrival and Nipa Mistri succumbed to her injuries at around 12:45 pm, he added.