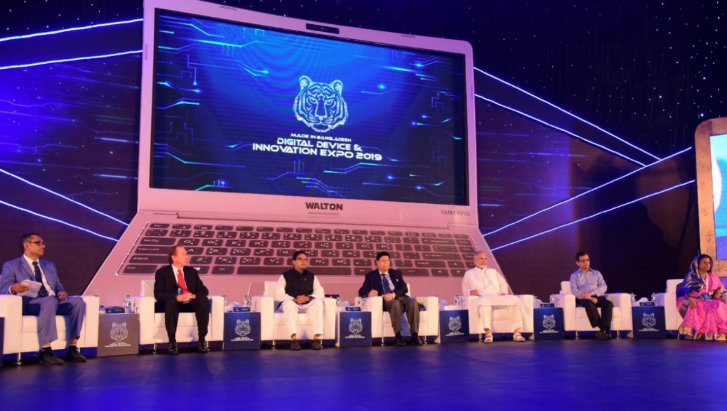 Recognising the progress that the country has made so far in ICT sector, Foreign Minister Dr AK Abdul Momen on Monday said Bangladesh becomes a ‘perfect platform of innovation’ to leap into the future prosperity.

"Vision 2021 and Digital Bangladesh are no more a dream but a reality today," he said focusing on connecting people through digital devices and innovations.

The Foreign Minister made the remarks while addressing the inaugural session of a three-day first-ever ‘Digital Device and Innovation Expo-2019’ at the Bangabandhu International Conference Centre (BICC) in the city.

Appreciating Sheikh Hasina’s leadership, Dr Momen said it was a decade ago when the Prime Minister declared her ‘Digital Bangladesh’ plan for the people of Bangladesh with four key priorities.

The Foreign Minister praised public-private partnership and assured of government's support to such efforts saying innovation is the key to sustainable development.

"We, both public and private sectors, must embrace innovations at their core to survive and thrive in the age of 4IR. Innovations would be the vital ingredient for sustainability of any sector during this fast-changing times and history of the developed countries taught us," he said.

For Bangladesh, the Foreign Minister said, there is no option but to make the right choice and take adequate preparation so that youths and industries can fully exploit this advantage of technology.

"Emergence and advent of spread of ICT industry, tools and norms have truly transformed lives and livelihoods across societies – even in remote corners of rural Bangladesh," he said.

The Foreign Minister said 96 percent Samsung smartphones sales in Bangladesh is currently assembled in its Narshindi plant. “No Samsung phone will be imported to Bangladesh from March next as it’ll be able to meet the entire domestic demand.”

He also said giants like Uber and Alibaba are already operating in the market, where startups like Pathao and Chaldal are reaping the fruit of this digital wave while operating alongside World-Class tech companies.

“Last year, we had exported four robots to South Korea. A few of our future projects are establishment of smart cities, integrated e-governance and virtual university of multimedia and innovation,” said the minister.

Dr Momen mentioned that the number of mobile phone subscribers has reached 162.6 million and internet subscribers have reached 98.136 million.

"We’ve the largest internet portal in the world with 25,000 web sites. Bangladesh has entered the space age by launching the Bangabandhu Satellite-1," he added.

However, Dr Momen said, all this came due to early recognition of the frontier technologies as a tool to bridge the gaps across different segments of people and society.

For the country, he said, ICT is about securing inclusion, dignity, well-being of people at large. "The government was quick in identifying the ICT industry as a thrust sector."

Consequently, within just one decade, all have seen significant job creation, growth in output, improvement in governance, said the minister.

According to UNCTAD’s latest ‘eTrade Readiness Assessment Report’, Bangladesh’s ICT sector has grown by 40 percent annually since 2010, thanks to public and private sector initiatives and facilitation from the government, he said.

To help achieve targets in the ICT sector, the government has declared tax holiday till 2024, only 1 percent import tax for materials of hardware industry and exceptional cash incentive of 10 percent for ICT export.

“I hope not only the local entrepreneurs, the foreign investors will also be greatly encouraged to take the rare advantages offered by the government,” Dr Momen said mentioning that once a basket case example and now Bangladesh is considered globally as a development miracle.

State Minister Palak said Bangladesh will soon become a significant robot-exporting country and steps have been taken in this regard.

“Let’s do something new, something innovative. Nothing is impossible,” he said urging the youngsters to stop dreaming of something old.

The State Minister said Bangladesh should be proud of having product like Walton’s laptop, a device that changed the world.