Can one earn a living by farming off-season watermelon? 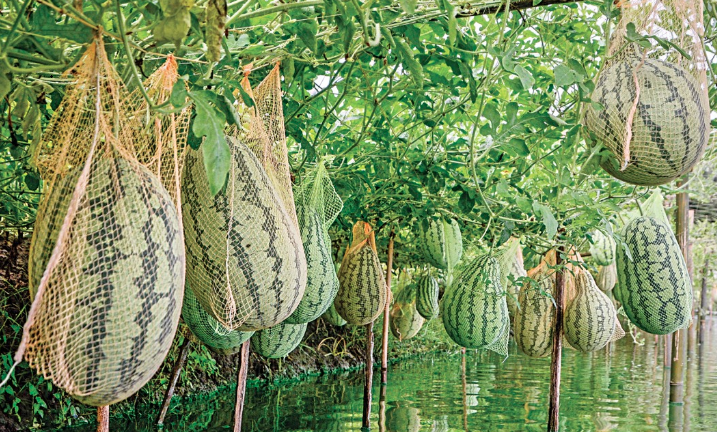 Ahad Ali Sheikh of Dumuria is actually a shrimp farmer by profession. Farming shrimp on 2.5 acres of land taken on lease in Nolghona Beel, he somehow managed to earn his livelihood.

His fortunes have, however, changed dramatically after he planted watermelon seeds along the aisle of the fish enclosure this year during monsoon -- off season. He sold watermelon worth Tk one lakh this year.

Ahad Ali is not alone. There are many in the upazila who have made profit by growing watermelon on their unused lands of fish enclosures.

Shawkat Dhali who lives in the same village sold watermelons worth Tk two lakh. Samad Dhali and some others in the village also saw successes by growing watermelons in their fish enclosures.

Yunus Fakir of Andulia, Mrittujoy of Choto Bondo and Alimuzzaman of Golna all planted watermelon on a one-acre aisle. Mizanur Rahman Sheikh of Kulbariya sold watermelon worth Tk five lakh from a two-acre of land.

According to Md Mosaddek Hossain, agriculture officer of Dumuria upazila, watermelon is a very good cash-crop and a farmer may get double the usual price if it is grown in an off-season.

Watermelons grown in fish enclosure manchas are hardly affected by insects. Since Golda shrimps are cultivated in these enclosures, one has to be careful about applying pesticides and the use of pesticides comes down during monsoon.

The lifespan of a watermelon is 65-70 days. With less time and investment, watermelon farming during monsoon is a highly profitable crop, he said adding that many farmers will show interest to grow watermelon in the next monsoon due to the good yield this year and the price being double, he said.

Once the only Aman rice used to be cultivated in the southern region, including Dumuria, leaving fields fallow throughout the year.

Golda shrimp farming has become popular in this region over the last two decades. Afterwards, rice and vegetables were grown in fish enclosures alongside shrimp. Now, off-season watermelon cultivation has been the latest addition.

Watermelon is available round the year in many countries like Thailand, Indonesia and Vietnam.

Earlier, watermelon was available in Bangladesh only during the Chaitra and Boishakh months. Now, watermelon is grown during monsoon and the yield is quite impressive. Farmers are getting higher prices, too.