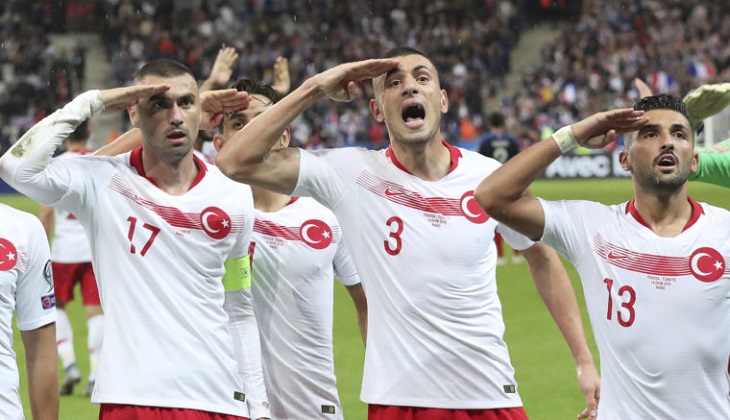 Turkish players defied UEFA with another military salute in Turkey's 1-1 draw with France in their European Championship qualifier on Monday.

UEFA was already looking into Turkish players' salutes from during and after Friday's 1-0 win over Albania. The European soccer federation prohibits political statements in stadiums.

But Turkish players lined up again to show a military salute after Kaan Ayhan's late equalizer in Paris. Captain Burak Yilmaz was joined by goalkeeper Mert Günok and several other outfield players in giving the salute toward the crowd — in apparent support of the Turkish forces involved in the country's invasion of Kurdish-held regions in northern Syria.

Defender Merih Demiral urged Ayhan to salute, too, leading to what looked like a heated discussion between the two, but the goal-scorer desisted and made his way back to the pitch.

Ayhan and Turkey striker Kenan Karaman both play for German side Fortuna Düsseldorf, which had issued a statement after Friday's game to distance itself from "politically motivated acts."

"Both players stand for values that the club lives by," Düsseldorf sporting director Lutz Pfannenstiel said.